Jump Rope Games To Help Everyone Jump In

Jump rope is one of the easiest ways to play alongside kids at recess or during break time. Grown-ups can introduce games that help kids develop basic jumping skills or use jump ropes in creative ways.

Here are a few of our favorite jump rope games for different ages and learning goals.

In Jump the River, players are going on a journey and need to jump over any rivers (parallel jump ropes) they find. Use this game to help younger kids practice jumping skills. They can jump with two feet, one foot, or with a twist. Connect to a science or history lesson by using butcher paper instead of ropes and letting kids draw the river-bank scenery in advance.

In Snake, an ordinary jump rope suddenly becomes a giant python! Two players hold the ends of the jump rope close to the ground and move it back and forth to make it slither like a snake. Other players take turns jumping over the snake. This game helps kids develop the coordination needed for jump rope and double dutch later on.

“Helicopter, helicopter, over my head, I choose a color and the color is red!” In this game, the leader twirls a jump rope on the ground; players jump into the circle and try to jump over the “helicopter blade” if they are wearing the color or item the leader calls.

Games to make everyone feel included:

In Cat and Mouse, jump rope skills become a matter of survival. This game combines jump rope and tag to keep all players moving through the rope. Players run and jump in a figure eight then get back in line; the goal of the mouse is to jump without getting tagged; the goal of the cat is to jump and the tag the mouse.

In this version of jump rope, less-skilled jumpers get just as much rope time as their more skilled peers. Each player runs through the rope on their first turn, jumps once on their second turn, then jumps three times, and so on. When players miss a jump, they re-do that number the next time through.

Make jump rope a team sport. Teams of jumpers compete against each other and work together to figure out how to get the most jumps. Every team member must jump at least once.

This is the biggest list of jump rope rhymes we’ve found online, with plenty of old and new favorites.

8. A History of Double Dutch

9. How to play Chinese Jump Rope

Also known as French Skipping (in England), American Jump Rope (in Scotland), Yoki (in Canada), gumitwist (in German), and elastics (Great Britain, Australia, and New Zealand), this game is popular around the world. It uses a circular rope, often made of rubber bands tied together. 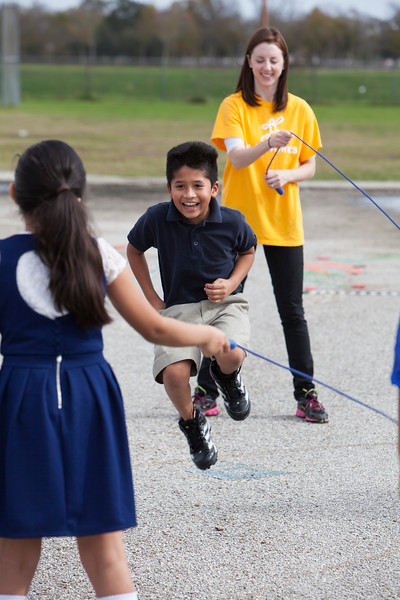 Other fun ways to use jump ropes:

Tired of playing jeopardy for team quizzes? Try Tic Tac Toe instead. All you need are 4 jumpropes to make a giant board in the shape of a “#”; players can use their bodies to make X’s and O’s. No jump ropes? Use cones, tape, or chalk instead.

This game is similar to the popular “human knot” team-building game, except to get un-tangled, players untie actual knots—without letting go of the jump rope they are holding. Use this game to build team-building and problem-solving skills.

Do your students have active imaginations? Encourage them to team up to invent a game. With the last of creating a game with boundaries, rules, and equipment, students’ minds are let loose to imagine any game they choose.

Bring Playworks To Your School

Playworks helps schools around the country make recess (and the rest of the day) more fun. Find out how we can help your school with playful group management, consistent rules and consequences, inclusive game facilitation, smooth transitions, and more.