On April 13, 2019, nearly 100 Junior Coaches from eight Baltimore city and four Anne Arundel County schools came together at the UA House in Baltimore, Maryland, for a day of team building activities and games to learn about conflict resolution, leadership, inclusion, and so much more.

As fourth and fifth-grade leaders, Junior Coaches regularly participate in a weekly peer mentorship program comprised of training and the opportunity to practice self-confidence, inclusion, and conflict resolution on the playground. This conference offered the opportunity for our Junior Coaches to showcase and enhance their leadership skill set through networking, skills, and knowledge building sessions. 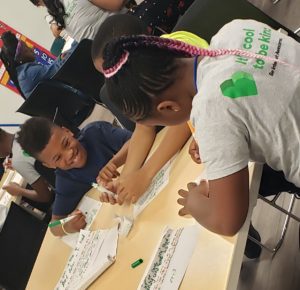 The theme of the conference was Agents of Change, and Junior Coaches were tasked with kindness missions leading into the event. Starting in January, Junior Coaches completed a photo scavenger hunt where they helped others, wrote letters of kindness to community adults, and acted as sleuths looking for acts of inclusion and courage. The Junior Coach squad that completed the most missions was to be awarded the coveted Golden Kickball.

As student leaders arrived, they were welcomed with recess where they were encouraged to try on new games and make new friends. Students then moved to the gym for a group game of “Spymaster” that promoted listening, honesty, focus, and cooperation. 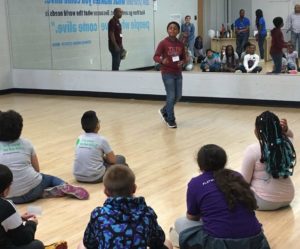 Baltimore City Councilman Zeke Cohen kicked off the event. As a former educator, Councilman Cohen’s remarks focused on the power of leaders to break the mold of expectations—self-imposed or otherwise. In a Facebook post following the event, Councilman Cohen said the story of Playworks Junior Coaches is “a Baltimore story that needs to be told.” He recognized that “the program teaches kids to be leaders” and the importance of the role that Junior Coaches play to “mediate conflicts, stop bullying and encourage collaboration.”

Junior Coaches were mixed into three groups representing the full spectrum of schools present. Each group—Rock, Paper, and Scissors—then participated in workshop sessions focused on building 21st century skills and focused in on topics reflecting of Playworks’ core values. Sessions on art and storytelling, public speaking, and inclusive fitness were led by former coaches, teachers, and nonprofit founders. Partners remarked that Junior Coaches were focused, enthusiastic, participatory, and confident in their sessions.

In the second half of the day, the student leaders used their problem solving skills and teamwork to solve riddles in a Playworks themed “Escape Room” and also at recess playing games with students from different schools and representing different zip codes.

Junior Coaches then had the opportunity to experience their first panel. This panel brought together leaders who live by the same values as our Junior Coaches and are working within Maryland to build healthy communities. Junior Coaches were able to hear about the leadership journeys, mistakes, and lessons learned from a range of diverse leaders including the Director of the Maryland Governor’s Office of Service and Volunteerism Van Brooks, Maryland State Delegate Mark Chang, 3rd-grade Teacher Tanika Lynch, and Combat Veteran Eric Marshall. 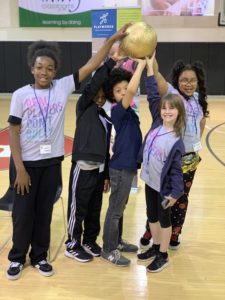 Staff then took a moment to acknowledge each cohort for how they put core values into practice at the conference. Each group was given a shout out for something that they did specifically well—from including others, trying new things, celebrating the accomplishments and uplifting others, and working together as a team.

The Golden Kickball was then awarded to the Henderson Hopkins Junior Coach team for completing 84 kindness missions prior to the event with honorable mention going to Mount Royal and runners up at Mount Washington and Gardenville.

The event closed with a hometown hero—Cyrus Jones of the Baltimore Ravens. Jones spoke about the power of remaining true to yourself. He asked our young leaders to reflect on what both success and leadership looks like to them and how that was reflected in their commitment to give back to the communities where they live. 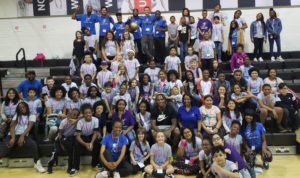 During the event, Junior Coaches were asked to fill out a retrospective survey based on a standardized measurement tool designed to measure student Self Management and Social Awareness. This survey is used to determine how the program influences growth in social and emotional competencies. Junior Coaches indicated that, compared to when they started as a Junior Coach, they listen to other people’s views more/much more; they compliment others more/much more on their accomplishments; they are more/much more likely to get along better with students who are different from them; they are more/much more respectful of others’ views when they are different from their own.

Junior Coaches will apply what they have learned in their communities as they teach games to their classmates and to younger students. Just as important, they will model positive language, positive culture, and conflict resolution techniques for the other kids.