This Sunday, more than 100 million people will settle in their homes together to watch the Seattle Seahawks and Denver Broncos compete for the title of the National Football League. With football on our nation’s mind, now is a great time to encourage kids’ play with football theme games. The following are six games to play with kids after school, at recess or at home on Super Bowl Sunday.

Fake Out. Practice learning how to fake as players often do while running the football. In the game of Fake Out, one person attempts to run across a given space without being tagged by another person who begins on the opposite line. Then players switch places, waiting in line across the opposite side to wait for their turn to run and fake or defend and tag.

Paper Football. Fold a standard piece of paper into three equal parts the long way. Fold the bottom edge of the paper up to a side edge forming a triangle. Continue folding triangles until there is just a small flap of paper remaining. Fold the flap into the triangle. You now have a paper football. The game is played on a long table with two people. Each player gets four tries to slide the paper football across the table from opposite ends. A touchdown is score by getting the football to sit partially on and partially off the end of the table. If a player scores, they get one attempt to flick the football through their opponent’s finger made up-rights. 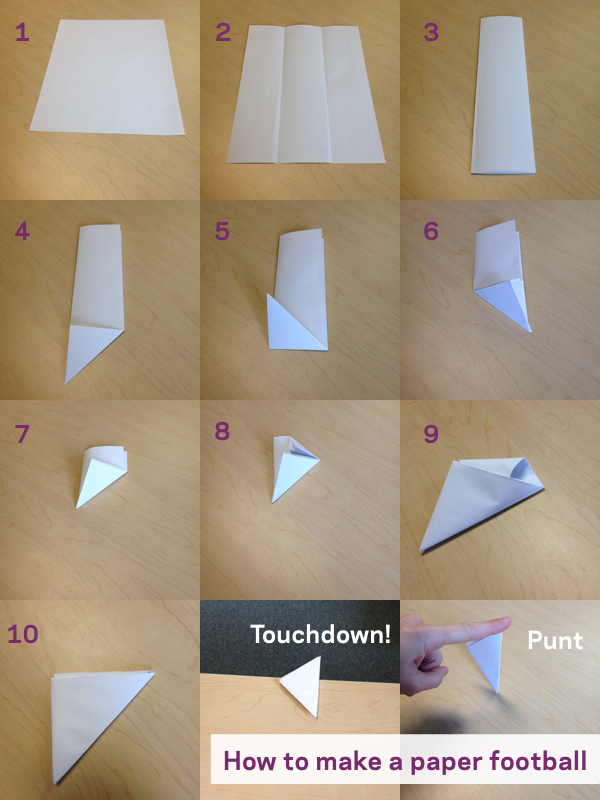 Quarter Football. Two teams take turns getting four tries to get a quarter–hidden in one player’s fist–all the way down the field. Once the play begins, the defensive team must tag–soft like a butterfly–all the offensive players. Once all players are tagged, the player with the quarter raises their hands and the next try begins from that spot. If the player with the hidden quarter in their hand cross the end zone, the two teams switch places.

Football art. Sit the kids down with art supplies and encourage some football themed art. You (or your child) could cut up small brown piece of paper or tissue paper and glue them to a piece of paper in the shape of a football. You could also print out some football-themed coloring papers or word searches that can be quickly found via a search on the web. Or you may just want to pull out some paper and crayons and ask the kids to draw you a picture of the game.

What are your favorite ways to entertain the kids during the Super Bowl?

Enjoy paper football? Here are more fun games to play with just a piece of paper.

Are you an educator? Start with recess to transform your school day!