The ball was tossed in the air followed by a loud chant of “CHEW-BA-CA” from everyone in the room and it was on!

After weeks of brainstorming, planning and practicing, the students of the Playworks after school program from Orchard Gardens Pilot School took their game to the annual Playworks Metro Boston Invent-A-Game Showcase. Their goal was to create and teach a new game to Playworks staff and students from around the city; my goal was to develop more confident, creative youth.
It took five weeks. We discussed the elements of a good game, talked about our favorite games and brainstormed new ideas. The students discovered that group decision-making takes time, work and cooperation. In the end, the group created an awesome new game called Chewbacca. They practiced long and hard teaching the game. Finally, they were prepared for the field trip to the Microsoft NERD Center.
Orchard Gardens was the first group to present at the Invent-A-Game Showcase. There were definitely nerves about speaking in front of a large group of peers, but the students had practiced their lines and all knew what to say. After the kids taught their game, everyone began playing. Chewbacca was an instant hit! Everyone was playing hard and having fun. And at the end of the day, we won the award for Best Teamwork.
Yes, that was a lot of fun, but the best part was bringing the game back to our school. Kids asked for it at recess, and I knew it would translate well. Chewbacca is an inclusive game that involves teamwork and is rotational—everyone gets a turn. And once the kids learn how to play, they don’t want to stop! 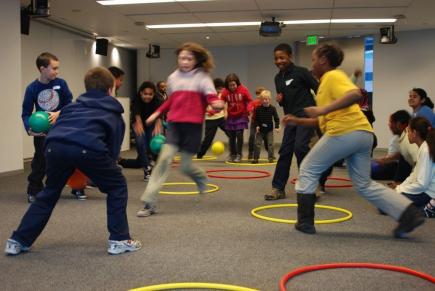 Several after school students have taken ownership of the game—teaching and running it during their own recesses without prompt. The trip clearly improved their public speaking skills and confidence. The experience also provided a common bond and expanded their camaraderie. It’s these intangibles that made the project not only good, but great. But for me, the best part has been seeing the game grow and reach new audiences who all know the kids–my students–were the creators!
Brian Fendell, a Boston-native, just completed his second year as program coordinator. He has enjoyed coaching youth at two different schools, especially since he can “school kids in four-square on a daily basis.”
Have you invented any new games that you’d like to share? Submit them to our New Games Contest by July 8 to win!

Behind the Scenes: Reinforcing SEL with Games ›

10 Brain Breaks That Will Help Your Students Refocus ›

It’s that time of day. Your students are restless, perhaps due to the weather. You can see their eyes glazing over as you review decimals and fractions—for the third time this week. The room is stuffy, and everyone is tired. Students move to their tables and begin their group work, when suddenly, you hear loud…

Jump Rope Games To Help Everyone Jump In ›

Jump rope is one of the easiest ways to play alongside kids at recess or during break time. Grown-ups can introduce games that help kids develop basic jumping skills or use jump ropes in creative ways. Here are a few of our favorite jump rope games for different ages and learning goals. Games to reinforce…