Creating an Inclusive Environment through Play

Guest blogger Amanda Padilla explains how she helped both students with special needs and students in general education see the value of different abilities on the playground.

As Playworks coach at an elementary school with a high population of students with special needs, my goal is to create an accepting and welcoming playground for all students. This year with play as my tool, I have seen that goal unfold. 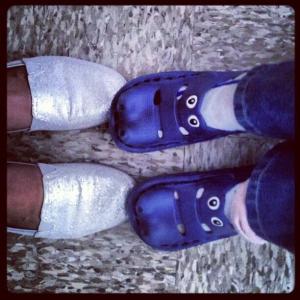 When I stepped on the playground, I saw students in special education and general education playing separately. On the first day, I met a boy I’ll call Jason smiling from ear to ear and spinning himself. I approached his teacher to ask when she’d like to schedule class game time; she told me Jason wasn’t ready because he has Autism and didn’t play well with large groups. This was my opportunity. I explained to her I’m here to help show students how to play together safely. Jason could join a class and everyone would learn about the different abilities people have.

The teachers and I made a plan together to ease Jason into class using his interests–spinning and shoes. We played circle games. The class stood in a circle foot to foot, Jason slowly inched his way into the circle to examine each student’s shoes. The students were encouraged to introduce themselves to Jason and ask for a high five. Often Jason would acknowledge the high five. At first the general education class was confused how this was play or why Jason did certain things, but by educating them them about people with disabilities, they began to understand how we all learn and think differently.

After some time, Jason was playing four square, kicking the ball with a partner and even kicking soccer goals. Jason began to come to recess with the other students. The students were not afraid or ashamed of playing with Jason, and he could play in large groups appropriately.

Every day, I get to experience the magic that happens when children with different abilities connect through play and accept each other as equals. This year with Jason and countless other children, I bridged the gap between the general and special education classes. This awesome experience further reminded play is powerful!

Guest blogger Amanda Padilla is a Playworks New Mexico program coordinator and the Playworks 2012 Rookie of the Year. She played basketball at New Mexico Highlands University where she received a Bachelors in Human Performance and Sport with a concentration in Special Education, a Masters in Sports Administration and is studying for a second masters in Special Education.