The First Lady Got It Right

The First Lady’s announced a focus on the power of play for promoting children’s health and well-being. 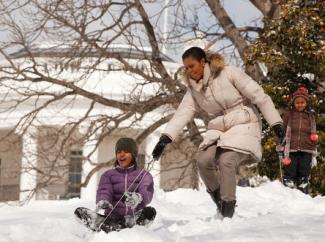 Recently I had the opportunity to be in the audience when the First Lady addressed the Partnership for a Healthier America’s inaugural Building a Healthier Future summit in Washington, DC.

It was the culminating event of a day and a half of speeches and breakout sessions, and despite all the good news of achievements and commitments, I was feeling a little downhearted. The conversation leading up to the First Lady’s speech had been heavily focused on the food and nutrition side of the equation, with little attention played to the role of physical activity. I was despairing that the programs working to promote physical education, physical activity and play were doomed to remaining on the periphery yet again.

Mrs. Obama started her talk in the usual fashion, reiterating the thanks and congratulations to the food manufacturers cutting sugar, grocery chains locating in under-served neighborhoods, and schools growing gardens. And then she spoke the words that so many of us had been waiting to hear:

“But it’s not enough. There is still more to do. Because we all know that the problem isn’t just what’s happening at meal time or snack time. It’s also about how our kids are spending the rest of their time each and every day.”

From there she launched into one of the most wonderful barn-stormers of a speech ever given on the power of play. She said the word ‘recess’ three times (I counted). She announced a bold new phase for the Let’s Move campaign that will essentially come down to making it cool to play outside again. She talked movingly about tapping kids intrinsic desire to play – “their innate desire for active play.”

As someone who advocates every day for the importance of play, I couldn’t have been happier. But I think the importance of the First Lady’s speech went far beyond just calling for more play and to the heart of why I care so much about play in the first place. The First Lady’s comment that it wasn’t just about meals, that it was about how kids spent the rest of their time each day was a rare acknowledgment that the kids we hope to impact are whole human beings with complex and multi-faceted lives, desires, fears and concerns.

She made connections between today’s kids and the grown-ups in the audience, asking us to find solutions from a place of identifying with them, as opposed to just deciding for them. In the end, she brought it down to one clear truth: “that each of us already has the power to start solving this problem for ourselves.” It is the ultimate lesson of play that all we’ve ever needed to get in the game was our willingness to participate and one another.

Playtime is many things. It’s fun for children. It’s an escape for busy parents. But it’s much more than that. According to Dr. Stephanie M. Carlson, distinguished McKnight University Professor at the University of Minnesota, and Reflection Sciences co-founder, “Play is about as ‘blueprinted’ a behavior as you can have in terms of basic survival and reproduction.” Furthermore,…

How Equity, Trauma, and Play Intersect ›

The play opportunity gap Play is critical for healthy child development as it is a safe way for kids to experiment and practice building relationships and cooperating with others. And yet, even in normal circumstances before COVID-19, there wasn’t an equal opportunity for every kid to play. We need to make sure this disparity does…