How can adults who supervise the playground—at school, in public parks, or in our back yards—best use that time to reinforce the skills kids need to thrive? In a recent blog post with our partners at United Way, Playworks New England shares life lessons from the playground, and strategies adults can use to support social and emotional skill development through play. We are sharing them again here. 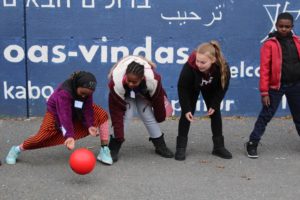 In an increasingly polarized society, how can we teach our children to be inclusive and empathetic toward their peers? Encourage girls and boys to play together, and give older children incentive to include younger kids. When there are language barriers, facilitate games like foursquare or Penalty-Kick Soccer that can be learned and played without verbal communication. Avoid games where kids will be permanently ‘out.’ Instead, play games like ‘Watch Your Back Tag’ or ‘Crossover Dodgeball’ where everyone can participate until the game is over.

Empowering kids to resolve their own conflicts instead of making an adult step in to mediate is a skill that will serve our children into adulthood—and a skill that many of us still lack! Teach simple games like Ro Sham Bo or Rock, Paper, Scissors so problems can be resolved quickly and won’t linger after playtime is over. 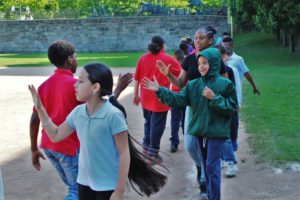 Something as simple as a high-five or a “good job, nice try!” can go a long way in creating a positive environment and instilling confidence in children. Adults should constantly be modeling this behavior and encouraging kids to follow suit. Play games like Traffic Jam that don’t end until all the players have reached a goal. Promote teamwork and encourage kids to cheer each other on. When you see your children encouraging others, you’ll know the lesson has stuck. 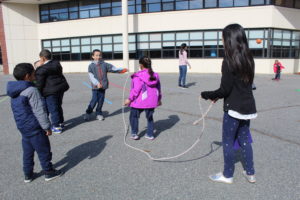 The playground is a perfect place to give children opportunities to lead. Teach one child the rules of a new game and have her teach the rest of the group. Have a child lead a game of Up Down Go or Red Light, Green Light. Older students can help make sure younger students feel included and know how to play.

It’s so easy to let winning take priority over having fun. Most kids at some point have claimed that they weren’t really tagged in kickball or that the dodgeball missed them, just to secure a victory. If you want to practice accountability and honesty, play a game like Museum Night Janitor. It’s almost impossible to claim “I didn’t move!” when the janitor catches you moving. Think about a way for kids to get tagged back in so the loss isn’t permanent. This will help them make the right decisions in the moment, and eventually teach them that losing a point isn’t worth being dishonest.

A few years ago, Playworks received a grant that came with a big challenge: How could we help more schools use our best recess strategies on their own, without our long-term presence? Thinking about all the schools we wanted to support, we noticed a gap. We offered year-round staffing, modeling, and consultation to schools near…

After a year of hard work, playful trial and error, and generous feedback from teachers and principals, we are happy to announce PlayworksU! Courses are available to preview through June 1; school subscriptions will be available starting August 1. These new online courses and videos from Playworks are designed to reinforce in-person training and help you…