The Power of One

Today’s guest post is by Evan Kennedy. Evan is a program manager for Playworks in the East Bay. He has worked for Playworks since 2006, when he was a program coordinator and AmeriCorps member in West Oakland. When he’s not playing outside, Evan may be found reading a good book or inventing a new game to play for office recess.

Recess can make or break a school day. At recess, students may feel bullied or intimidated, games may be identified as “for girls” or “for boys,” and students may organize games, but only invite those labeled as “good” at sports to play. Many students then feel excluded and, instead of playing, act out–creating problems for themselves and others. Sound familiar? These are only a few of the issues Riverside Elementary School in San Pablo, CA saw during recess last year.

This led Principal Alicia Azcarraga to turn to Playworks. Ms. Azcarraga wanted someone at her school who could help change the dynamic on the playground—to create a healthy, happy, inclusive school environment. This positive change began within the first weeks Program Coordinator Shantrell Sneed, “Coach Trell,” stepped on the playground. 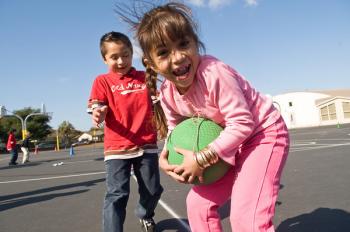 “The most important thing I try to do is break down the gender stereotypes that are so common on the playground,” said Coach Trell, a former University of California, Berkeley basketball player. “I start by playing games that are traditionally ‘boys’ games to show the boy’s that girls can play any game that they can, and then encourage the girls to play any game they want to.”

“I also introduce a lot of gender-neutral games, such as Sprout Ball and Hula Hoop Tag, games that everyone can play and that are inclusive of every student.”

Coach Trell made it her mission to identify the students who were starting issues on the playground and set to change their behavior.

By providing these students with attention and special roles at recess, the kids became “more focused on playing games and having fun, instead of causing trouble – other students follow their example.”

“Playworks has our kids moving, playing and being active,” Ms. Azcarraga says “It has taught them how to be responsible for their behavior on the playground, be social and respect the rules of the games they are playing.”

Now, with fewer students in the office, more time is spent in the classroom learning. Students no longer bring conflicts from the playground to class; they’ve gained skills to resolve them on the playground. The entire school has become a more harmonious and playful environment.