Student Plays at Recess for the First Time

This story comes from Laura Diedrich, an educator in Littleton, CO upon completing Playworks Pro and implementing new games and activities at recess. 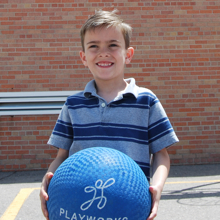 Sean is an amazing first grader at our school. He loves to talk with teachers and be a helper whenever possible. We began noticing that at recess, he would much rather hang out with the grown ups than play with students. He preferred to walk and talk with the adult on duty or sit in his line the whole recess instead of interacting with other students.

Since we have implemented Playworks, we have seen a complete change in his recess behavior. Sean is the first one outside, excited to play the game of the week or get involved in a game of four square or switch that is taking place. He runs, laughs and plays with other students. And he is always trying to encourage other kids to come play the games as well.

It has been so exciting to see him go through this transition, and his mom Julie shared she is overjoyed that he is playing on recess! She said it has brought her to tears to hear him come home and tell stories about the new games he has learned. “He not only plays at school now, but he’s connected with a boy in his class that lives down the street,” Julie said. “They play almost every afternoon. Sean even wants to join a baseball and soccer team this summer. Playworks made a huge impact on our lives.”

I love that Sean still comes by to say hello and give me my daily hug, but it makes me even happier when he says “Ok, I’m going to go play now!” and runs off to join a game. For me, this has made all the hard work we have put into the implementation of Playworks worth it!