Overcoming the challenges of creating an inclusive school community

Educators know that helping new students transition into a school’s  culture is critical to building and sustaining a healthy community. This can be tough, especially when students come from different backgrounds or cultures.

We see examples of schools overcoming this challenge on Playworks playgrounds around the country. The key to their success is enabling students to feel safe and included on the playground.

For example, Mary Gage Peterson Elementary School sits on Chicago’s northwest side, surrounded by a mosaic of newly established immigrant communities. The school’s 900 students speak 43 different languages at home, from Urdu to Vietnamese. Its zip code – 60625 – is one of the most linguistically and ethnically diverse schools in the nation.

Peterson’s multicultural community also presents its own unique challenges for creating a positive and inclusive school culture. Just imagine: so many different kids interacting with people of so many different cultures and languages for the first time. 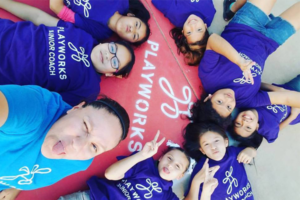 The Peterson playground very clearly spotlighted some of these challenges. Before Playworks, students separated themselves into small clusters, not by age or grade, but by culture and language. While students felt comfortable, the creation of these siloed groups inhibited inclusiveness and community building.

One year after implementing Playworks, you could walk onto the playground and feel a difference. Play became a common denominator rather than language or homeplace. By leading with inclusion and empathy, and encouraging every student to jump into games, kids began befriending others from different backgrounds and chose to regularly play games together.

“There can be tension within cultures on the recess playground,” said Mitzi.

She worked with a teacher to identify a pathway to bringing the community together. Mitzi created an International Family Night to bring together refugee families to provide resources they need to thrive.

After bringing together families and gaining the trust of the parents, school administrators, and kids, Mitzi started to see positive changes on the playground and in the classroom.

“When you see the best come out of every child, no matter their gender, race, or age, you get to experience one of the best things ever,” she said.

While not every community has a similar extent of linguistic or ethnic diversity, every playground is inherently diverse. By leveraging the power of play, Playworks finds ways to bring students with different abilities, backgrounds, cultures, and identities together.