Two weeks ago, Playworks hosted Play On 2010 at Columbia University in New York. The conference was designed to bring together individuals and organizations in the field of play and youth development. This is the second year we’ve taken it on, somehow forgetting each year how much energy it requires until we’re about ready to drop. But when the first speakers came on the stage (in this case, ABC’s Juju Chang and AmeriCorps’ Director John Gomperts), suddenly we were recharged like kids ready for recess. 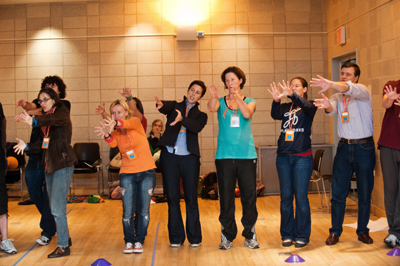 The conference was amazing. We had more than three dozen sessions and breakouts. We had the top tier of those who care about our movement. Dr. Toni Yancey led us in instant recess. Dr. David Elkind spoke on play and early childhood. Sam Kass, White House chef and policy advisor addressed the dinner crowd. Soccer great Julie Foudy spoke on teamwork and leadership. Fran Mainella of the US Play Coalition led Roger Hart of UNICEF, Joah Almon of the Alliance for Childhood, Dr. Yancey and KaBOOM!’s Darrell Hammond in a discussion on the future of the play movement.  NYU’s Pedro Noguera capped the conference with a call to action.  In the thick of it all, we had recess, did some yoga, learned about outdoor play, and got tips on how to be more positive coaches. We also premiered some amazing short films that captured our values and the value of play.

Play On was a gathering of like-minded individuals and organizations coming from a wide range of perspectives.  Most amazingly, there was an overwhelming sense that we all want the same thing: to make sure that every child in America has the chance to play every day. There is a tremendous amount of work to be done to make this dream a reality, but the conference showed that there is both a wealth of ideas and an inspiring commitment to making it happen.

While we’re still a little exhausted, we’re ready to play. Many thanks again to all who helped make it such an amazing two days.  We look forward to working – and playing — with all of you!