During the summer of 2010 I went to visit my best friend, Max, in Niamey, Niger. I was prepared for the African environment 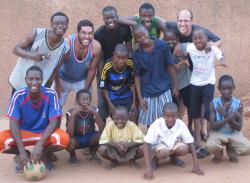 and hoped for an enriching experience, but I never expected that my ability to engage children in athletics would benefit my friend in his country and his community as a whole.

Every day while Max was at work, I would set off to explore his neighborhood. I would find myself taking photographs of interesting sights, writing in my journal, and sipping coffee in the local cafe. Unfortunately, since I don’t speak any French aside from “oui” and “merci beaucoup,”  I found it very challenging to meet people. So I decided to reach out to the group of people that I knew would accept me…  children.

On my daily walk I often saw a group of kids playing soccer. I started to build a rapport with them by watching their games and clapping at exciting plays and moves. Eventually, I joined their game and became part of their daily routine. Soon after I began introducing some core Playworks games, with Max serving as translator.  In addition to playing soccer, the kids learned to enjoy a diversity of games like Switch and Nations Dodgeball.  Competitiveness and frustration often resulted in arguments, but under my direction Ro-Sham-Bo (also known as Rock-Paper-Scissors) became the default argument-settler.

One evening after we left a game with the kids, Max took me out to dinner. In a rare serious tone, he told me how thankful he was that I had come to visit him in Niger and help him bond with the kids in his neighborhood. He explained that by reaching out to these children the local community would accept him, as a foreigner living in this community, more than ever before.

A few weeks after I departed Niger, Max updated me. The children continued to play the games that I had taught them and had even shown them to children I’d never had the chance to meet. And likewise, I shared my stories of playing with these Nigerian children with my current students in Washington, D.C. to inspire them to be thankful for what they have, and to strive for the cohesive and athletic fun that only sports and play can provide.

Today’s guest blog is from Sam Balto. Now a physical education teacher in Washington, DC, Sam spent one year as an AmeriCorps Playworks program coordinator. He has a passion for facilitating play and traveling the world.