Empowering Kids to be Courageous 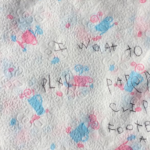 Eric is a kindergarten student who rarely chose to play at recess. He was pleasant and talkative with teachers and recess staff, but was hesitant to interact with classmates.

One day, Eric came to recess carrying a napkin, on which he had written, “I want to play Paper Clip Football.” Paper Clip Football is a game that Eric’s Playworks Coach introduced as one more option at recess to make it easier for all kids to join in and play.

Eric had heard all about the game from his older brother, and was eager for a chance to play himself. With a plan and courage that day, Eric jumped right in, playing Paper Clip Football with the other kids.

Together, we can give kids the childhood they deserve—filled with laughter, fun, and growth.