Being a Junior Coach helped Julia Masur find her voice.

When Julia Masur transferred to Adelante Spanish Immersion School in Redwood City halfway through second grade, most of the kids had been together since kindergarten. “I didn’t have a ton of friends,” says Julia, “and it was hard adjusting. I wasn’t a super social kid—I was kind of a nerd—and it was a challenge for me to break out of my shell.”

By high school, Julia was a self-described, “very loud person.” In fact, “My friends in high school called me Loudy. I have a loud voice that carries really well.” As team captain of her high school water polo team, being loud was key: “It is just necessary so your team can hear you. I had to yell a lot!”

For Julia however, finding her voice meant more than just learning to use her lungs. In elementary school, “I was a little bossy, and not the most popular kid,” Julia recalls. “Playworks helped me with a lot of social interaction stuff. Junior Coaches would lead games together, especially big games or games we knew would be super popular. We had to collaborate.” 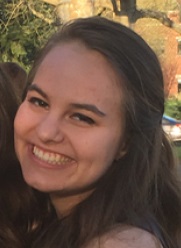 “Being a junior coach was my first real opportunity to be a leader outside of schoolwork,” Julia says. “It was up to us to schedule what games we wanted to play, to figure out who would work together, and to get together the equipment.”

The teamwork and leadership skills Julia learned as a Junior Coach, even more than her loud voice, made her successful as a water polo team captain. They also prepared her for her future career.

“The younger kids really look to you and see you as a role model,” says Julia, who is now a first year student at the University of Puget Sound in Tacoma, Washington. “I really enjoy working with kids, and that started when I was a Junior Coach.”

Julia continued working with kids and growing as a leader as a camp counselor. Now, she is studying History with a triple minor in Education Studies, Math, and Sociology/Anthropology, and plans to become a history teacher.

“I still have my Junior Coach shirt in my drawer, and my friends and I still talked about it during high school,” she says. “It really sticks with you!”