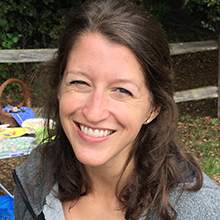 Who is Catherine Herzog?

I’m a native to Southern California and have chased sunshine and adventure since I was a kid. I am known to be an impulsive and frequent traveler, with a habit of moving every few years (typically to places I’ve never visited before), including Spain, Australia, Northern California, and most recently, Denver, Colorado. I’m the baby of the family and have siblings, nieces and nephews spread all throughout the West and East coasts.

Who has inspired you in your life and why?

My Dad. He was the quintessential family man and made his children the center of his universe. He was gracious, loving, hysterical and kind to everyone around him. Despite battling a terminal disease for 24 years, he stayed active, positive and never let anything get him down. That man made the impossible possible, simply because of his positive mindset and the choices he made. He loved life and didn’t let his illness affect his world, or the people in it.

When did you start working, how long did you work, and what roles did you hold at Playworks?

I worked at Playworks from 2014-2015 as I made a career transition from Entertainment to non-profit, and began as Program Associate. I was fortunate enough to have the opportunity to mold the position into a role that best suited my skill set and passion, as well as fit the organization’s biggest needs.

If you were to describe your personality using a Playworks game, what game would you choose and why?

Handball! I’m always bouncing around from place to place and meeting new people.

What motivated you to start the nonprofit Sun&Sole?

I created Sun&Sole with the idea of breaking down gender stereotypes and creating a safe and fun place for all girls to play outside, explore, feel strong, and be proud of who they are!

If you could change one thing about Sun&Sole, what would it be?

I don’t think I’d change anything about Sun&Sole at this point, but I do hope to have greater resources, so we can expand and reach more girls. I have also had asks from parents and peers to create a boys’ version of the program, as well as a program for adult women, and a girls’ summer camp. Would love to do all three!

You LOVE the outdoors, so I have to ask, how many hikes (total) do you think you have taken in your lifetime?

When you think of Playworks as an organization, what comes to mind?

How can other Playworks Alumni connect with you?

I’m terrible at email, slightly better at text, and best in person. 😉 Alums – let’s get coffee, a hike, or drinks on the books!