In any open space (i.e. grass field, parking lot, gymnasium), put down boundary cones forming a large rectangle of about 75x45 yards. Size of open space can be adjusted for age and ability of participants.

Rookie Rugby is similar to Flag Football except it is continuous and aerobic, keeping kids active and moving at all times. When a flag is pulled, players pass the ball and continue without stopping play. There are several lead up games that can be used to introduce basic skills and terms, including freeze tag, sharks and minnows, duck-duck-goose, etc.

A full Guidebook for Rookie Rugby can be found here. 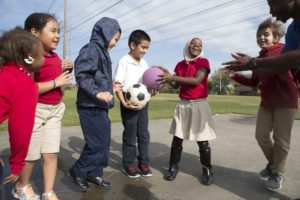 Download a free electronic copy of the Playworks Game Guide with hundreds of games you can use today.

Get the Game Guide