Guest Blogger Jennifer Holmes-Ledet learned how to play and coach basketball along side her 4th and 5th grade girls basketball team.

As a Playworks coach, I lead and coach hundreds of kids in different games every day. Often, when they are nervous and not sure if they want to participate, I play with them to give them the confidence to join the game. And sometimes it works the other way around. When I found out I would coach the girls' basketball team, I was the one who was nervous and not feeling confident. I thought it would be impossible. Although I am an active person and have worked with kids for years, I didn't know much about organized sports – especially basketball. My only memories of playing basketball were when my twin sister's team was short a player and they assumed that because I was tall I would play well. They were wrong. 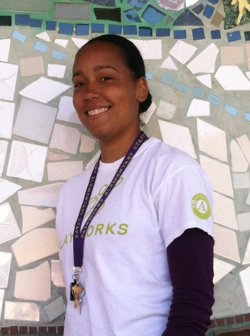 Learning the basic rules of basketball took time, but I explained to my team that this would be a learning process for all of us — if we worked together the team would be successful. However, because many of my players also were inexperienced, the season started off rocky with a lack of communication and sharing the ball. So we started at the beginning. Once we had the fundamentals down, we focused on being a team and working together. And it paid off.

At the end of the season we had a really close game. Coaching from the sidelines, I saw a player wide open for a shot. I shouted, "pass the ball, she's open under the basket!" The ball ended up in the open player's hands, a girl who hadn't made a shot all season. Although she was the shortest girl on the court, we all had worked on building our confidence together. So she launched the ball up with all her might and went for the shot.

She made it! My team was so overjoyed for her that they all forgot about the game and started cheering and giving high fives.

That was a very proud moment for me and the whole team. By the end of the season, I realized that I was able to help the girls as a basketball coach, but they were also able to help me. As with the girls basketball team, my service to my school community through AmeriCorps has helped me become a better person.

Jennifer Holmes-Ledet is an AmeriCorps Member at Fairmount Elementary School in San Francisco, CA. Jennifers hobbies are cooking, hiking, camping, playing the viola, reading science articles and her favorite game knockout. She has lived in California her entire life and has a Masters degree in public health with an emphasis in health promotion and behavior change.  he is passionate about keeping kids healthy and the power of positive meaningful play!

Join us as we celebrate 25 years of play! Kids need to play more than ever. This year, Playworks is celebrating our 25th anniversary. That’s 25 years of inclusive games, positive language, high-fives, conflict resolution techniques, skill development, and more. We need your support to continue bringing kids the #powerofplay for the next 25 years.…

As kids return to school in person… It may be difficult to keep them physically distant. Although the CDC has updated COVID safety guidance to be a physical distance of 3 feet for students rather than the previous 6 feet, that can still feel like a lot to children. After months away from their friends…