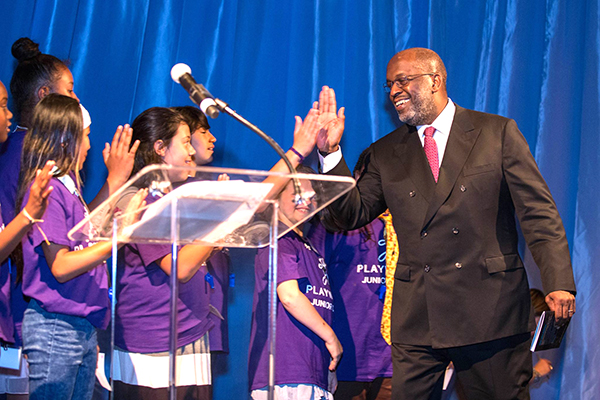 Bernard J. Tyson accepts Playworks’ 2016 Inspirational Leadership Award from Playworks Junior Coaches at the 2016 Playworks Get in the Game Soirée.

Oakland, CA—March 9, 2016—Playworks announced today that Bernard J. Tyson, chairman and CEO of Kaiser Permanente, has been selected as the recipient for the 2016 Inspiring Leadership Award for exemplifying the qualities that Playworks develops in young people across the country. The annual award recognizes a leader who energizes the workplace, brings a playful and collaborative style to the pursuit of serious business goals, and inspires others through respectful leadership, teamwork, empathy, and fairness.

Bernard J. Tyson will be honored at Get in the Game, a benefit for Playworks, on May 13, 2016 at 6 p.m. at San Francisco’s City View at Metreon. Kaiser Permanente has been a longtime supporter of Playworks, and Richard (Dick) Daniels, executive vice president and CIO, serves on the Playworks Board of Directors.

Under Tyson’s leadership, Kaiser Permanente is delivering on its “Thrive” promise through an industry-leading 21st century approach to health care and health care coverage that is helping members achieve their aspirations of total health.

“The innovation and commitment to partnership that Bernard J. Tyson demonstrates at Kaiser Permanente exemplify the kind of playful, collaborative leadership we hope students at Playworks schools will embody. We are proud to present him with the 2016 Inspiring Leadership Award,” said Jill Vialet, CEO and founder of Playworks.

As one example of Kaiser Permanente’s playful and collaborative approach, Kaiser Permanente, Playworks, and the Golden State Warriors have teamed up to educate youth in the Bay Area on the importance of healthy eating and active living. The Golden State Warriors Get Fit program serves to highlight good nutrition as well as safe and healthy play through health related activities around recess, basketball, nutrition, and healthy choices. To date, the partnership has reached 60,000 students in 111 Bay Area elementary schools.

“I’m inspired to see the great work Playworks is doing across the country. Playworks is helping kids thrive. And helping people thrive is at the heart of our work at Kaiser Permanente,” said Tyson. “I’m proud of the longstanding partnership we’ve had with Playworks, and I’m honored to receive this leadership award.”

Playworks is also honoring individuals for their commitment to using the power of play to bring out the best in every kid. The Most Valuable Principal Award will be presented to Dr. Charles Kramer, principal of Patterson Park Public Charter in Baltimore, MD for going above and beyond to ensure school allows time and space for play. The Rookie of the Year Award will be presented to first-year Playworks coach DeMar George, a Playworks Coach at Kennedy Elementary in Santa Ana, CA for exemplifying service and the power of play.

Playworks is the leading national nonprofit leveraging the power of play to transform children’s physical and emotional health. Playworks currently serves more than 1,200 schools in 23 U.S. cities, and reaches more than 700,000 students directly and through professional training services. Learn more about Playworks and the power of play at playworks.org.

Join us as we celebrate 25 years of play! Kids need to play more than ever. This year, Playworks is celebrating our 25th anniversary. That’s 25 years of inclusive games, positive language, high-fives, conflict resolution techniques, skill development, and more. We need your support to continue bringing kids the #powerofplay for the next 25 years.…

As kids return to school in person… It may be difficult to keep them physically distant. Although the CDC has updated COVID safety guidance to be a physical distance of 3 feet for students rather than the previous 6 feet, that can still feel like a lot to children. After months away from their friends…