On December 5, Playworks Minnesota was invited to attend the Minnesota Vikings Adoption Fun Fest. The event, which brings together adopted children and their families for an evening of play, was hosted at the Vikings’ practice facility in Winter Park.

With more than 500 attendees, the night was full of smiles, laughter, and games.

As part of the event’s festivities, Playworks was given the opportunity to spread the power of play and lead games with children and their families throughout the night. Playworks coaches were positioned at midfield, where they engaged attendees of all ages in inclusive and safe activities that were fun for everyone.

Playworks was thrilled to be a part of the event for a second year. In only a few hours of facilitating games, Playworks and the Minnesota Vikings were able to lift spirits and make a positive impact on everyone involved.

A huge thank you to the Minnesota Vikings, the staff of Playworks Minnesota, and the families and involved. We are already looking forward to next year’s event! 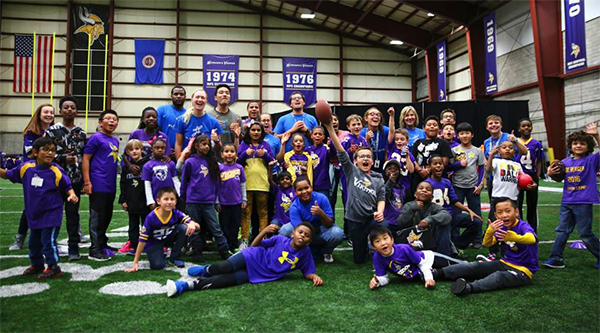