On January 24, Twelve Consulting joined Playworks Minnesota at Lucy Laney Elementary for a Play Day as part of their Day of Inspiration. At Twelve, the staff strives to express their core values of personal growth, excellence, collaboration, and well-being in their daily work. On this day, the values were on full display. The visit to Lucy Laney was dedicated to collaboration, personal growth, and community involvement.

After the team arrived at the school, Playworks staff provided a short training that touched on the specific values outlined. Games like wolves and bunnies, Jedi mind trick, and one fish, two fish touched on these themes and prepared the group to join the students at recess. Once outside, the folks from Twelve Consulting put on their coach shirts for the day and joined students in soccer, foursquare, jump rope, and more. Many high-fives and "good jobs" were given to the students.

We ended the event with a game of rock, paper, scissors rockstar and gave woosh claps out to our champions. The fantastic group from Twelve Consulting continued their Day of Inspiration with more stops along the way. We were thrilled to be part of this day of service and inspiration! 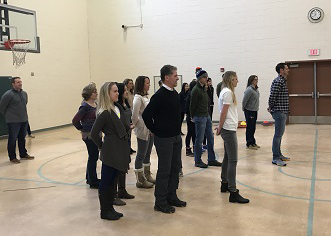