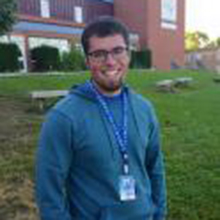 Coach Brandon is a Minnesota kid through and through. He grew up in Blaine, Minnesota and he’s lived in the Twin Cities most of his life. He graduated from the University of Wisconsin Stevens Point in 2015 but made his way back to Minnesota soon after. He spends his free time running, listening to music, boating, cooking, disc golfing, playing lawn games with family and friends, and watching his favorite Minnesota sports teams: the Wild, Timberwolves, and Vikings.

Coach Brandon is in his second year as a Playworks coach. He spent last year rocking recess at Whittier Elementary in South Minneapolis and this year he’s bringing that experience to his role as the flex coach where he gets to play at and work with all of Minnesota’s direct-service schools.

What was your favorite recess game growing up?

Soccer! Soccer was my life growing up.

Has your favorite game changed now that you’re a coach?

Yes and no! I love them all including soccer but my favorite recess game at the moment is an incredibly simple and fun game called switch.

What is the best part about being a coach?

The best part about being a coach is the kids. It’s so easy to get up every morning and go to work when you know your day consists of high-fives, smiles, playing games, and hilarious conversations with the coolest kids in the world.

If you could travel anywhere, where would you go?

If I could go anywhere in the world I would go to Switzerland. I’ve always wanted to see the Alps in person.

If you could meet any person, living or deceased, who would it be and why?

Julius Caesar. I was FASCINATED with ancient Rome as a kid so it’d be cool to meet its most iconic figure.