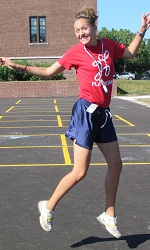 One of my favorite things about being a program coordinator is the extra time I get to do leadership and empowerment work with my junior coaches. My school had an open house and asked me to facilitate a short session for new and existing families to see Playworks in action. I decided to play “I am the Chi Master!,” a game that could be played safely in a packed gym full of families. Because I wanted to highlight my junior coaches, I worked to prepare them to be on stage with me. Together we worked through stage fright, vocal projection, and planned out each person’s role. I also spent the week prior to the open house playing this game with as many students as possible during Class Game Time.

On open house night, the junior coaches were nervous. I was still trying to calm them down as we stood waiting for our turn. As soon as the curtains were drawn, the whole crowd started clapping and cheering for the students showing their purple JC pride on stage. Each student got a chance to introduce themselves with the microphone and shared the grade level they played with at recess, getting applause from all of those children and families in the audience.

We began our game with each junior coach showing off a different tool they use to get student’s attention. The JCs even created a series on their own that went like this:

As I introduced the game, the junior coaches dispersed themselves in the crowd, translating in Spanish, clarifying directions and rules, and working to help everyone keep their bodies safe. The game was a big success.

Afterward, they came rushing around the corner to meet me outside the gym and couldn’t stop talking; they were full of adrenaline and amazed at how well the session had gone! They were thrilled with the number of people who responded to their signals, even teachers and parents!

It was an amazing opportunity for the school community to experience what the junior coach program is all about, and to demonstate to the junior coaches how much they have grown since the beginning of this year. They remarked how they would “NEVER have been able to do that before Playworks!” After months of working with younger students, these kids were empowered to see their skills translate to adults and in a forum outside of recess.

I have since seen a dramatic shift in their performance, and find myself allowing more and more freedom for my students to step up, create new games, and teach in their own ways.