Now a member of the Illinois Playmakers Board, Patrice continues building upon her legacy of service. We invite you to join us and celebrate Playworks Illinois’ 10th anniversary by reading her story. 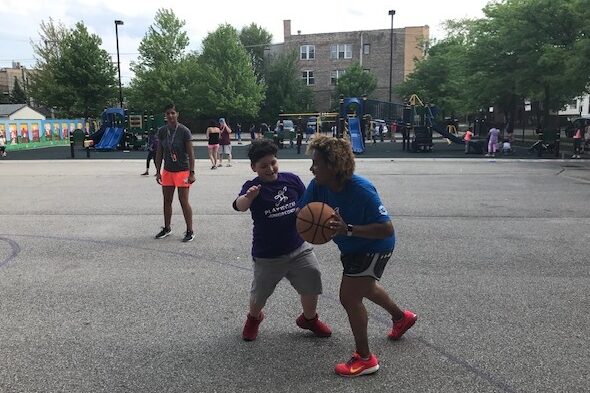 Patrice, who found Playworks perfectly combined her interests and highlighted the importance of social emotional learning and physical health, said that her experience as a Playworks Coach was so impactful both on herself personally and within her community. So, she decided to stay involved with the organization and joined the Playworks Illinois Playmakers Board where she now offers her expertise as a therapist and alumni coach.

Patrice was a Playworks AmeriCorps Coach during the 2017-2018 school year at James Monroe Elementary School in Chicago. She found Playworks while searching for jobs following her graduation with a master’s degree in Counseling with a specialization in Sport and Health Psychology.

Patrice enjoyed getting to know her students over the course of the year, especially the Junior Coaches, or youth leaders. 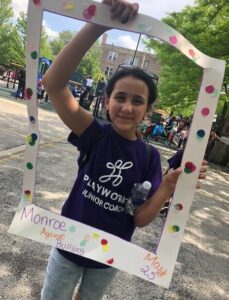 The Junior Coaches were almost all new to the program and had such enthusiasm to learn and lead others. During one meeting, they were having a particularly hard time with bullying going on at school and family struggles that affected them at home. They came into the meeting and wanted to talk with Patrice and their peers about what was happening and they needed someone to listen.

“I’m so thankful that I could create that space for students to talk about what they are struggling with. A bunch of ten year olds were able to come in and say here’s what I’m struggling with and trust each other. It was really important to teach them empathy and how they could support each other,” she said.

Teachers told Patrice how excited the Junior Coaches would be to lead a game during class and how they noticed a rise in confidence in the students. Moments like these laid the groundwork for why Patrice wanted to stay involved with Playworks even after her year as a coach ended. 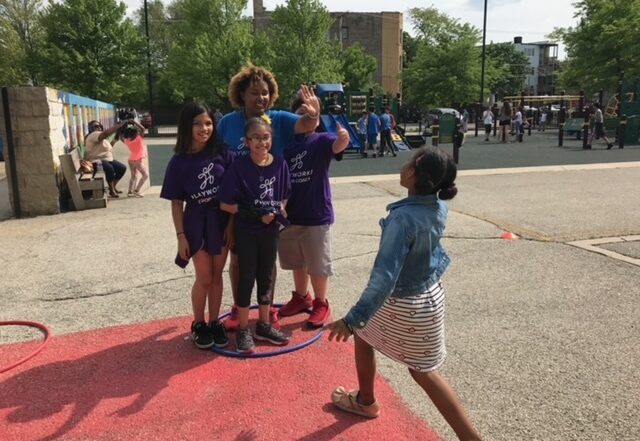 In addition to how they helped her kids, Patrice also further developed her own skills like relationship building, time management, and program implementation. This was invaluable to Patrice, as few other positions could offer this type of professional development, and credits it with helping her become the professional she is today.

Patrice thought her year as a coach was awesome, and has loved to serve on the board the past two years and continue the Playworks mission.

“To watch Playworks Illinois adjust and adapt during the COVID-19 pandemic and still come up with different ways to reach as many kids as possible is really cool,” said Patrice.

Playworks Illinois is so thankful for alumni coaches like Patrice who continue to support kids on and off the playground. We’ll be sharing more stories from school staff, students, and Playworks alumni throughout our 10th anniversary, so be on the lookout for our next feature story.

A principal is commonly defined as the staff member with the greatest responsibility for the management of the school. Chelsea Easter is so much more than that. She is an educator, an advocate, a motivator, and a Playworker at heart.  Chelsea Easter is currently the high school principal at Victory College Prep in Indianapolis, but…

After just two weeks of working at Playworks, Andrew “Coach Brash” Brasher knew what he wanted to do. He wanted to belong to a school community. Playworks put him in a position to realize his career goals, and now Coach Brash is a high school social worker just a few minutes away from Namaste Charter…