After just two weeks of working at Playworks, Andrew “Coach Brash” Brasher knew what he wanted to do. He wanted to belong to a school community.

Playworks put him in a position to realize his career goals, and now Coach Brash is a high school social worker just a few minutes away from Namaste Charter School where he was a Playworks coach in 2018.

Coach Brash came to Playworks Illinois after he was a coach with Playworks Louisiana. He was placed at Namaste, where he learned so much about restorative practices and trauma-informed care. Playworks laid the foundation for Coach Brash to continue to use those skills now at Back of the Yards College Prep High School. 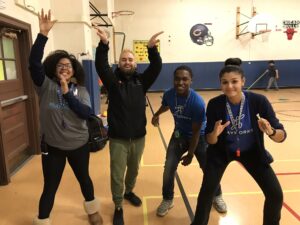 Coach Brash really appreciates the time he had with his elementary school students. It’s such an important time where students are so impressionable. When Playworks partners with a school, the students take what they learn during programming throughout their entire education.

“I’ve seen the impact. Kids ask about Playworks. I still run into students from Namaste and they tell me how much they loved the program and the different activities they were doing. It really sticks with them. Taking play seriously is really important. Even if Playworks is only at a school for a little while, taking play seriously will stick with the school community. Administrators see the impact this type of play has on their students and how they function for the rest of the day.”

In May of 2019, Playworks Illinois coaches and Junior Coaches came together at Google Chicago for the Junior Coach Leadership Conference. The conference is a culmination of everything the Junior Coaches learned throughout the year and a celebration of their hard work. That was just one of the moments that stands out when Coach Brash thinks back to his time at Playworks. 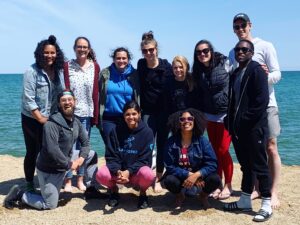 “The conference was something the kids were so excited for. And it was even better than they had imagined. Google really rolled out the red carpet for us and the students got to see what it was like to be in that big tech business environment. I’ll never forget that day and the joy on the kids’ faces.”

Thank you Coach Brash for being a part of the Playworks Illinois family and for teaching us the infamous turtle clap. We hope you are loving these feature stories as much as we are! If you missed the first one on Coach Patrice, read it here and make sure to follow us on social media @playworksil so you don’t miss any!

A principal is commonly defined as the staff member with the greatest responsibility for the management of the school. Chelsea Easter is so much more than that. She is an educator, an advocate, a motivator, and a Playworker at heart.  Chelsea Easter is currently the high school principal at Victory College Prep in Indianapolis, but…

Patrice Whitfield embodies a Playworker. Now a member of the Illinois Playmakers Board, Patrice continues building upon her legacy of service. We invite you to join us and celebrate Playworks Illinois’ 10th anniversary by reading her story. Patrice, who found Playworks perfectly combined her interests and highlighted the importance of social emotional learning and physical…