A principal is commonly defined as the staff member with the greatest responsibility for the management of the school. Chelsea Easter is so much more than that. She is an educator, an advocate, a motivator, and a Playworker at heart.

Chelsea Easter is currently the high school principal at Victory College Prep in Indianapolis, but years before that she was a coach during Playworks Illinois’ launch year, 2011-12. Chelsea worked alongside five other coaches that year to lay the foundation of Playworks in Illinois. As we are now celebrating 10 years we couldn’t think of a better person to describe what that means than Chelsea.

Chelsea was matched with Namaste Charter school and faced a variety of challenges. At her first recess she had a plan, but all of her students only spoke Spanish and she only spoke English. Additionally, her school had never had recess and didn’t have a playground. 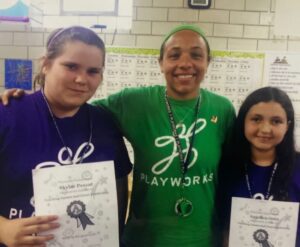 “So we took a parking lot and turned it into foursquare, tag, two hand touch football, all within probably 27 parking spaces. I saw this as an exciting opportunity to make the program my own and create some new things. But, it was also one of the most peaceful spaces I’ve ever been in. Working through their motto, the light in you sees the light in me, I found spaces for peer mediation and conflict management every day as these kids navigated recess for the first time.”

Chelsea still connects with Namaste families and staff, and still hears about what she implemented in the school being used 10 years later. “It’s awesome to lay that groundwork,” she said. And she really did lay the groundwork! Playworks Illinois has partnered with Namaste for the past nine years, evolving through a variety of services.

“It’s the little moments that stand out to me. I still think about so many of those kids as now they would have graduated high school and go to college. You don’t ever realize in those moments of telling a kid that you love them or that they can be anything they want to be, that they hear it. I mean it when I say it but you don’t always know they hear it. So seeing a lot of those kids on social media today today sending me graduation cards is a fantastic moment.” 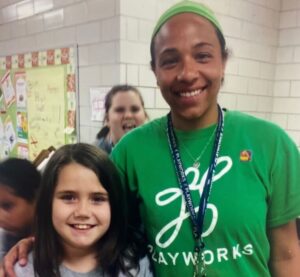 There were many more moments Chelsea is grateful for, like taking her Junior Coaches to go see the White Sox stadium, something they had lived just a few blocks from their entire life but never got the opportunity to see. Chelsea said being a coach became so much more than a job, it became a part of her. These past 10 years really wouldn’t be possible without people like Chelsea who still believe in the power of play long after they work with Playworks.

Thank you Chelsea for being that kind, caring, consistent adult at Namaste and encouraging those kids to be anything they wanted to be. Our partnership with Namaste has been so meaningful and we look forward to many more years with them.

This was our third feature story in our series celebrating 10 years of Playworks Illinois. If you missed our first two about current board member and alumni Coach Patrice Whitfield and alumni Coach Andrew Brasher read their stories here!

After just two weeks of working at Playworks, Andrew “Coach Brash” Brasher knew what he wanted to do. He wanted to belong to a school community. Playworks put him in a position to realize his career goals, and now Coach Brash is a high school social worker just a few minutes away from Namaste Charter…

Patrice Whitfield embodies a Playworker. Now a member of the Illinois Playmakers Board, Patrice continues building upon her legacy of service. We invite you to join us and celebrate Playworks Illinois’ 10th anniversary by reading her story. Patrice, who found Playworks perfectly combined her interests and highlighted the importance of social emotional learning and physical…