The Denver Broncos: Engaging Kids in Safe and Healthy Play on and off the Field

Playworks Colorado partners with the Denver Broncos to help with our mission to ensure every kid has access to opportunities for physical activity and healthy play! Normally we would join the Denver Broncos on their practice field, but for now, our interactions look a little different. This year, two of our partner schools had the opportunity to engage with Denver Broncos players in a virtual setting. Continue reading to see what Coach Natalie and Coach Dillon have to say about their visits!

On December 14 and 15, my school and I enjoyed the opportunity to engage with the Denver Broncos over Google Meet! To make the most out of the visit, I collaborated with my school leadership to create a competition for students to compete for a chance to meet the players. The two classes at my school to complete and pass the most iReady reading lessons earned one of the two meeting slots to play with the Denver Broncos! 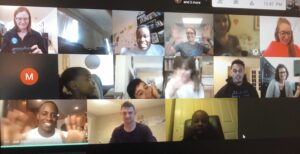 Each of the classes with the most success passed over 100 reading lessons, and what amazed me the most was that these students were in kindergarten and first grade. It was awesome to see young kids so engaged in their learning.

For both meetings, I followed a similar program. We began with introductions from the players, and quickly jumped into game time. We played Up, Down, Stop, Go, Simon Says, and Zoomed In which were a hit for everyone involved! To end the meeting, we had about 20 minutes for questions from the students.

On the 14th, Ms. Chartier’s kindergarten class met with the following players from the Denver Broncos:

The players were also very involved in our question and answer session! Ms. Chartier read off questions from her students about the players’ favorite foods, favorite animals, and how to reach their goals.

The next day, Ms. Ancewicz’s first grade class met with another group of Denver Broncos players:

Each of the players took part in leading a part of either Up, Down, Stop, Go or Simon Says! Justin Simmons made some very good guesses for our game “Zoomed In” as well. For their question and answer session, Ms. Ancewicz’s students asked about how the players exercised, other sports they liked to play, what the player’s favorite books were, and more.

On December 14, 2020, I had the opportunity to have some Denver Broncos players and their mascot come for a “virtual visit.” The players who visited International Academy of Denver at Harrington were Dalton Risner (#66 Offensive Lineman)  and Melvin Gordon (#25 Running Back). It was really cool to have players who are not only starters but well known in the Colorado community.

We were aware of the visit for several weeks prior which gave us the opportunity to plan with the students’ involvement, as well as games that would work with a larger virtual group. The student involvement was in the form of creating questions that would be asked during the Q&A aspect of the visit. Additionally, this involvement helped build on the excitement for the visit.

For the actual Denver Bronco visit, we planned to do introductions of the players and the mascot, play several games, and move into a Q&A. It was really special to see so many kids show up for the visit. We included 3rd-5th graders in order to manage the amount of students, while also providing the opportunity to as many students as possible.

For me, one thing that made this event so special was the amount of students who attended and their excitement to be there. In remote learning, it is difficult to get kids to participate in games, or even attend classes on a regular basis. However, during the Bronco visit there seemed to be every 3rd-5th grader in attendance and joyfully participating.

The first game we played was Cheese Master with Miles, the mascot. Since Miles does not speak I would count down “Three, Two, One, Cheese.” Everyone would throw out cheese. If anyone had the same cheese as the Cheese Master, Miles, they had to do three jumping jacks.

The other game we played was Four Corners where students find a blue corner, orange corner, or white corner to stand in. Dalton Risner would say, “find a new corner in 5,4,3,2,1” and then pick a corner. If the student was in the corner of the color Risner picked they would do three jumping jacks. Risner was great about making it fun for the kids, reading out names of students he caught, and being playful.

Finally, the Q&A was great because kids were able to ask their questions to the players. Some questions were football-related like, “what is the most touchdowns you have scored?” However, other questions that engaged the students academically were asked like, “do you use math in football?” Both Risner and Gordon were great about answering the questions with full detail and empowerment toward the students.

The highlight of the visit was seeing how even in the remote setting this was still a very impactful event for students. Many had all their Bronco gear out with their families huddled around the computer to see the players. I was very happy to see the overall joy this event gave to the students in my school.

We are so incredibly grateful to provide our students with this opportunity! Thank you Denver Broncos for helping us engage kids in safe, healthy, and active play!