Winter is here in Colorado, but Playworks is keeping kids active with floor hockey leagues. These leagues are bringing students together on and off the court. A few of our coaches shared stories about the impact hockey leagues are making in their schools.

I met Jay in my first year as a Playworks coach. Jay was a difficult kid who was always getting into trouble and causing mischief. This year, as a fifth-grader, Jay has grown so much since I first met him. He has become more respectful and more involved within the school.

After sitting on the sidelines during the sports leagues last year, Jay decided to participate in the floor hockey league this year. Jay never played any type of hockey before this year but he's a natural. You can see on his face that he really enjoys playing and being part of a team. Jay has not only come to enjoy the sport but he has also shown better sportsmanship. This positive behavior has even transferred to the playground and into the classroom.

I have been incredibly impressed by his growth since last year, particularly how much he has changed over the last few months. The hockey league has helped Jay become a team player among his peers, teachers, and other adults.

Hockey was a hit this fall at Mosley Elementary. We rolled out our 16 team roster during 1st–8th-grade recess.

For weeks, students had been eager to learn stick-handling skills and the rules of the game, especially our students with special needs. The first day I set up the equipment, these students jumped right in, playing alongside other students outside of their Special Education class. The game has not only brought a special joy to the playground with many students discovering the sport for the first time, but it has also created a stronger school community.

The love for the game doesn't stop at the main recess. I keep the equipment out all day so that students with special needs can practice during their second recess later in the afternoon. During this recess, without all of the other students around, students with special needs are learning skills such as how to share, communicate verbally, respect each other and the equipment, and positively win and lose, as well as how to successfully pass and shoot.

The excitement these students have for hockey has given them more courage to play with other students outside of their class. Hockey has enabled these students to communicate and socialize with others in a new way and has provided a huge stepping stone for inclusiveness, safety, and confidence on my playground for all students.

As a second-year coach with Playworks, I was really excited to coach hockey because I didn't have the chance to participate last year.

I began the hockey season by handing out information and permission slips early. Initially, I was disappointed that my students appeared to have limited interest.

By the time I had my first practice, I was worried that I would have to postpone our first game because I only had two students show up. However, the week after that practice, I had five kids come to me during recess to ask me for hockey league permission slips. When I asked these students about their sudden interest in playing hockey, they said that the two players that attended the first practice had encouraged them to sign up.

Because the first practice went smoothly and the attendees had fun, I now have a strong hockey team made up of friends who want to get in the game. Being a part of a team has given these kids a community to rely on that they may not have had before — I am so thankful for that!

Coach Devon, Fairview Elementary
I had eight boys and two girls on my hockey team. There was one girl in particular that was very nervous our first game. She almost didn't want to play the game and was about to quit the team. I told her to try the sport on, have confidence, and enjoy herself.

By the end of the first game, she was bursting with joy. She became a new player and teammate altogether. Not only has she become my best defender, she has also scored the third most goals on the team and is a leader on and off the team.

Children need role models to encourage them to try something new. This is a great example of how our coaches are making a difference by bringing out the best in every kid through play.

The hockey league at Trevista Elementary has been a huge success! Thanks to the generous donations of sticks, pucks, pads, and jerseys, the students of Trevista are extremely excited about the league.

Initially, I had around 30 fourth and fifth-graders sign up to be in the league. Unfortunately, I had to narrow down that number to twelve students. The goal I had for this league was to pick students who may struggle with finding an appropriate way to exert their energy or those who could really benefit from being a part of a team.

So far in this league, there is one student who really sticks out in my mind: a fifth-grade boy who is on a behavior improvement plan. Since I announced we were hosting a hockey league, he has been extremely excited. I chose this student because he is very athletic and could benefit from being a part of a team. However, my biggest fear was that he would disrupt the team or get in fights with others.

But after the first practice, I knew that I made a good choice. This student has shown behavioral improvement and has taken on a leadership role on the team. He always shows up ready to play and work hard. He plays with a positive attitude and always encourages his teammates. He has earned two hat tricks (three goals in a single game) this season and hopes to continue playing hockey. 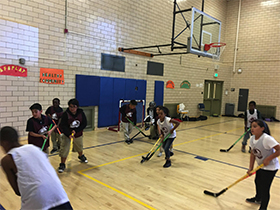 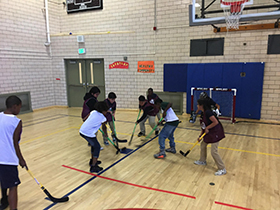 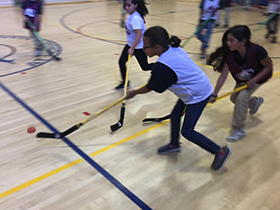 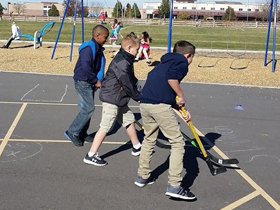