The Denver Broncos welcomed Playworks to Sports Authority Field at Mile High on October 23, 2012.  Playworks staff led a Corporate Recess for Broncos executive staff, cheerleaders and players. The event was a great opportunity for the diverse employees of the Broncos to have fun in a non-business, or competitive, environment. The staff and players were introduced to Ball 360, Ro-Sham-Bo Rockstar, and Giants, Wizards, and Elves.

This was followed by the Broncos 14th Annual Hometown Huddle which brought 350 children from local Boys & Girls Clubs to Sports Authority Field to visit the stadium and play games on the field and around the stadium.  The goal of Hometown Huddle is to promote physical fitness and play as part of the NFL's Play60 campaign. Playworks Coaches led groups of up to 50 kids in a number of games that they could bring back to their clubs and schools.  Joining the fun were Broncos players Julius Thomas, Virgil Green, Knowshon Moreno, Chris Gronkowski, Ryan Clady, David Bruton, Danny Trevathan, Wesley Woodyard, Ben Garland, Quentin Saulsberry, Duke Ihenacho and Omar Bolden.  The players jumped right into games, creating a fantastic environment for fun and play.  As the sun set, the kids were provided dinner, courtesy of the Broncos before boarding buses back to their local Boys & Girls Clubs.  Also making the day a success were the Mile High United Way and the American Heart Association who provided fantastic volunteers.  The day was a terrific success for everyone involved and something that all parties hope to build on in the future. 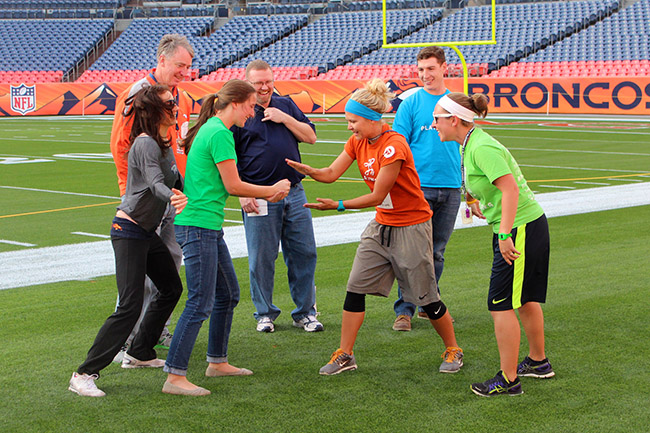