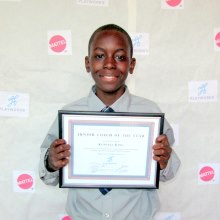 This year, we are proud to present the award to Kendall King, a fifth grader at Hopkins Lloyd Community School. Kendall applied to be a Junior Coach so that he could help the younger students have more fun at recess.

“I really like having fun playing games like kickball, bucketball, and switch with the little kids. I have a lot more energy when I am a Junior Coach because it is a lot of fun. All the kids laugh when we play games even if we mess up,” says Kendall.

According to Coach Kevin, the Playworks program coordinator at Hopkins Lloyd, the language and behaviors Kendall demonstrates on a regular basis show that he has taken his leadership skills out of Junior Coach meetings, Junior Coach shifts, and class game times and has begun to demonstrate them at all times throughout the school day.

“During his own recess, Kendall is quick to suggest roshambo (rock, paper, scissors) to settle disputes, give a high five to a friend in need, and keep the game moving,” says Coach Kevin.

The Junior Coach Leadership Program has allowed Kendall to develop his voice, assert himself, and build confidence. With reinforcement and encouragement, Kendall has grown increasingly confident in his instincts and will doubtlessly be carrying his leadership experience with him into middle school and his community.

If you would like to learn more about Kendall, check out his full interview to read more about what he has learned from Playworks.