Brett Jones: Coach of the Month for October 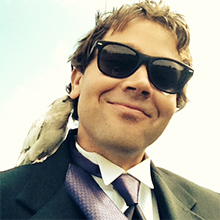 This month Playworks Utah is honoring Americorps member, Coach Brett Jones, for his outstanding work at Antelope Elementary in Layton, UT. In addition to having one of the most popular and fun Games of the Week of any coach in Utah, Brett has developed what I like to call a cult of personality that is by equal turns bizarre and utterly amazing. Both staff at Antelope and students at the school have bought in so completely to Brett’s whimsical antics, that the school has been transformed. Below are some answers to a few questions I posed to Coach Brett, and a story he told me about a recent occurrence at his school, which, I think, illustrates the amazing way he projects the power of play for his kids.

What is your background and experience?

I was born. Later, I was a child. I have been drifting around ever since, taking odd jobs and underpaying jobs that I find satisfying. I have no idea what I'm doing as acoach, and I don't know what I'll do after this. Maybe go to graduate school.  Maybe walk across America. I'm not good at capitalism.

What are some highlights of your program at your school?

Every single success I have had here is due to the way that the teachers and administration support the way I coach our children, and to the way they support every one of my strange ideas, virtually unconditionally. They have given me incredible access to their school and to their resources. I could not do anything without their support. For example, the Principal has pretty much given me carte blanche to run a yearlong experiment on the children in which I will attempt to teach them empathy and the values of community service through slowly, somewhat methodically creating a narrative within our school of a micronation that we all belong to, The Republic of Recess, and the implications of individual and collective responsibilities within our Republic. We have a flag, a system for rewarding civic service, an ersatz currency, and even an anthem.  We may have passports soon, if I ever get around to making those.

Our Game of the Week has also been insanely popular, and I don't know what has caused this. I guess it's due, in part, to the relentless, obnoxious promotion of the Game of the Week that I do, every day, in Class Game Times, announcements, during the game itself, and even in the hallways. We crushed our record for the most people playing at one time, at 68 students.

I came to work on Thursday morning with all of my regular work gear (chalk, tools, new kickballs, etc.), and a tuxedo in a dry cleaner bag. The tuxedo was not for work (I was going to a hoity-toity awards ceremony) but it turned out that it was going to be my uniform for the rest of the day.  My small office, once a utility closet, is on the far side of the stage inside our elementary school's cafeteria. Nobody uses it much, so I was surprised when I saw that the stage was packed with a bunch of strangers busily assembling cameras, backdrops, and those umbrella thingies they use at photo shoots. It was picture day for the school yearbook.

I don't remember who told me that I had to have my picture taken, but the jist of the situation was that I was required to for my ID badge and for school records. Also, I had to get the picture taken at 7:45, right before my before-school recess. As I was wearing shorts and a t-shirt, what I had on seemed inappropriate for a yearbook photo, so I did what any rational person would do and put on the tuxedo in my office and got in line.

After morning recess, I went to the office to do my daily announcement. That ran long, so I ran back outside to lead my first class game time, immediately followed by another recess. There were absolutely no breaks to come for the rest of the day, so I coached, led Class Game Times and played games. I even went down the slide a few times in the tux which was, by this point, considerably dirty and sweaty.

One thing I remember most about this experience was not the various reactions some children had to my appearance, but instead the complete reactions of other children who either didn't notice, or didn't care that I was wearing a tuxedo and playing tag. They just looked at me, accepted the fact, and walked on.  I remember thinking, "What do I look like to them right now?"

The day sped by, and I was still all dressed up and dirty for my last Class Game Time. After a few warm-up exercises and requisite re-explaining of rules, I led them to play their first game on one of our basketball courts. The game was going fairly well until the children went into a unified, simultaneous, emotional meltdown. They were pointing at me with eyes wide open. Some screamed for some reason. I looked down at the ground next to my scuffed dress shoes and saw a largish, white cockatoo serenely looking up at me. So I did what any rational person would do, and put out my finger. The bird flew up to my finger, perched on it, and then climbed up my shoulder and started nibbling on my earlobe.

As the tuxedo had come to be accepted as the new normal, the appearance of the bird must have seemed planned to them. Even their teacher asked me if it was my bird. I told them that it wasn't, but that the bird was my friend and that he had come to help us have the best class time, ever. I told them that his name was "Mr. Birdstein," and that we must neither yell nor waste time, or he would be startled and would fly away and leave us. They accepted this as a given.

I put the bird back on my finger, and moved an entire, silent fourth-grade class out to the field for the next game. We played an almost wordless game of tag, did a quick cheer together, and then I walked them back to their class. I put the bird in my office, and went out to afternoon recess, still in the tuxedo.

The day ended and I, in my filthy, disheveled tuxedo, got ready to leave work to speed to my formal event. I had no plan as to what to do with the bird and, as I would not be home until late in the night, I didn't feel like keeping it was an option. So I brought it in the office, explained my dilemma to the secretary, and she called animal control.  She told me the next day that they picked it up about an hour later.