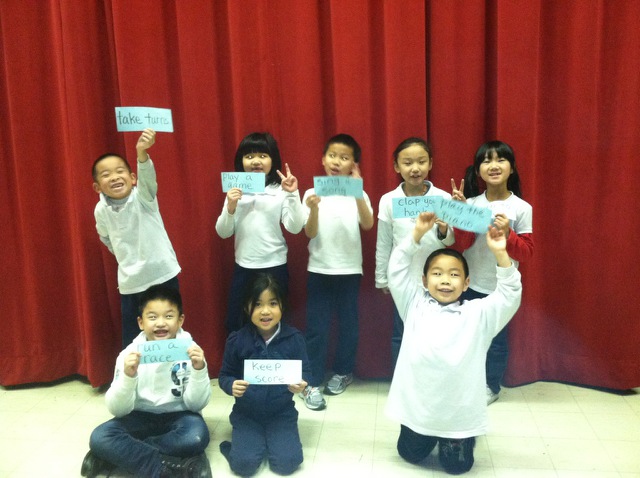 With more than half of McCall School’s population speaking Mandarin as a primary language, communication is often difficult. Last year it was very challenging throughout recess trying to involve the ESOL (English for Speakers of Other Languages) students in any of the game stations. Often these students did not recognize what we refer to as ‘core games’ and would decline participation.

In the beginning of the year Ms. Chen, one of the ESOL teachers, asked if her classes could be added to my regular Class Game Time schedule, when I go to individual classes and work with them and the teacher to teach games and playground activities. I welcomed the challenge and reviewed some helpful ESOL teaching strategies with her.  During class we taught in English and Mandarin, using use visual aids for reference. 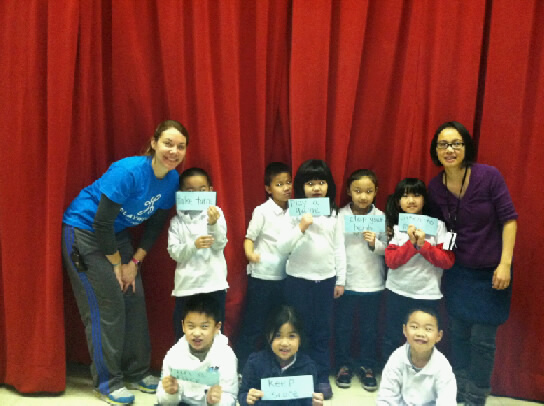 The neat thing about play is that most can learn just by seeing and doing.  After just a few classes I noticed a difference in these students at recess.  They understood the playground and line-up time expectations and were beginning to participate in the ‘core games.' The students began to approach and attempt to communicate more with me in the hallways and during recess.  Recently I have been asking them to try to teach me more Mandarin! Not only are they learning, but I am learning as well. Being an AmeriCorps Coach with Playworks has given me one of the greatest experiences I could have ever imagined.

Playworks Program Manager Greg learned how to loom a rubber-band bracelet under the instruction of Junior Coach Kelis. By allowing himself to learn, Greg enabled Kelis to exercise her leadership skills. This moment captured what Playworks is all about—bringing the best out of kids through the power of play. This healthy interaction touched me. The student had become the coach, and the coach was now a student.  Greg described the moment as fun and rewarding.  As a Playworks coach based in Bache-Martin Elementary School, I hope to seize such teachable moments as Greg did.