What is a Peace Path and how do I use it in my school?

Conflict is a natural part of recess (and of life). Who’s out in the game of Four Square? Which team gets to start with the ball?

There are game conflicts, conflicts over the recess rules, and personal conflicts. Especially with multiple classrooms at recess together and students playing with people they might not have played with before, knowing how to manage these situations is more important than ever. 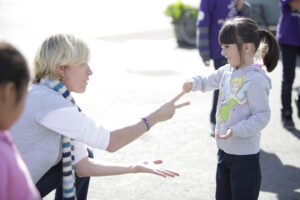 Rock Paper Scissors is great for simple conflicts. We love it for games like Switch, Foursquare, and even tag games like Watch Your Back Tag, as it’s a quick way to settle who was first in line or who has the next turn on the swings. By playing a quick game of rock paper scissors, students learn how to resolve their own conflicts quickly and effectively so that they can spend less time arguing and more time playing.

However, when conflicts are more complicated or personal that a game of rock paper scissors won’t solve, students need to know how to approach them in a positive and peaceful way, processing their emotions and understand the ramifications of the situation. 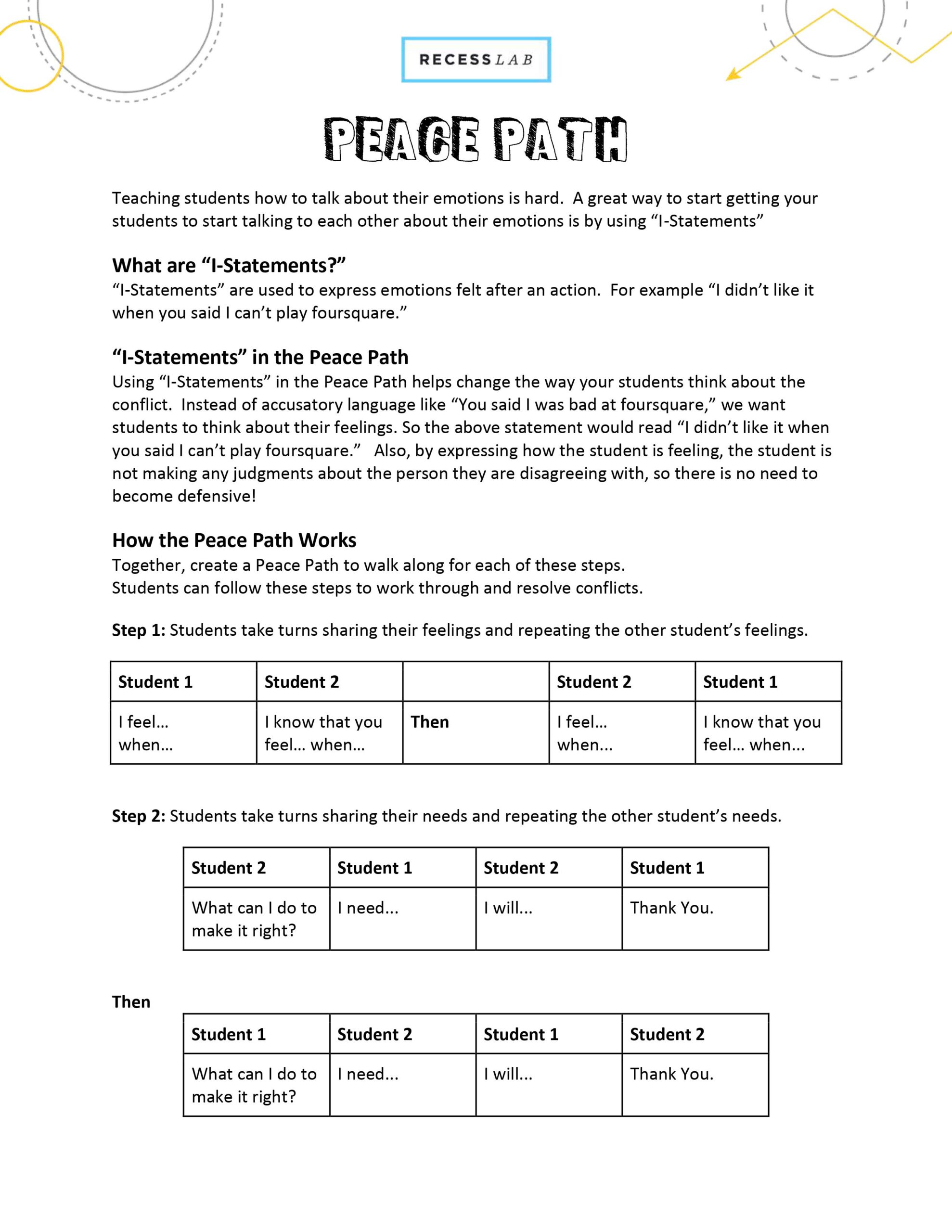 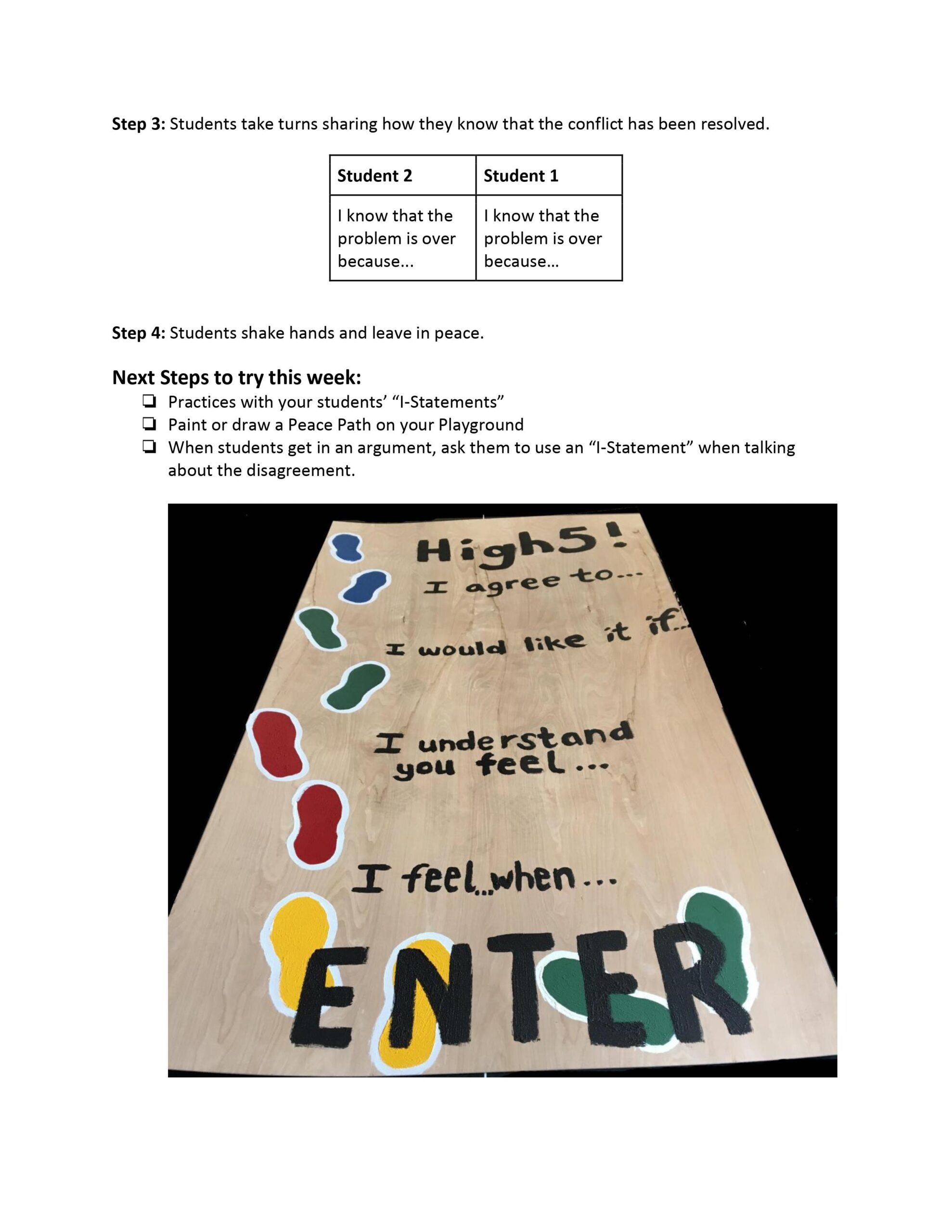 Peace Paths are a great addition to your playground because they provide students with a script to follow to talk through their conflicts.

You can create your own script, use our sample here, or tie in language and steps from an existing conflict resolution or SEL program that your school is currently using. No matter what script you’re using, though, it’s good to start the Peace Path with a few deep breaths or another calming exercise to make sure all parties are able to enter the Peace Path calmly and respectfully. If a student isn’t ready yet, they can take a break until they’re ready. 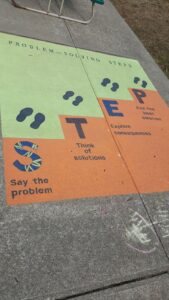 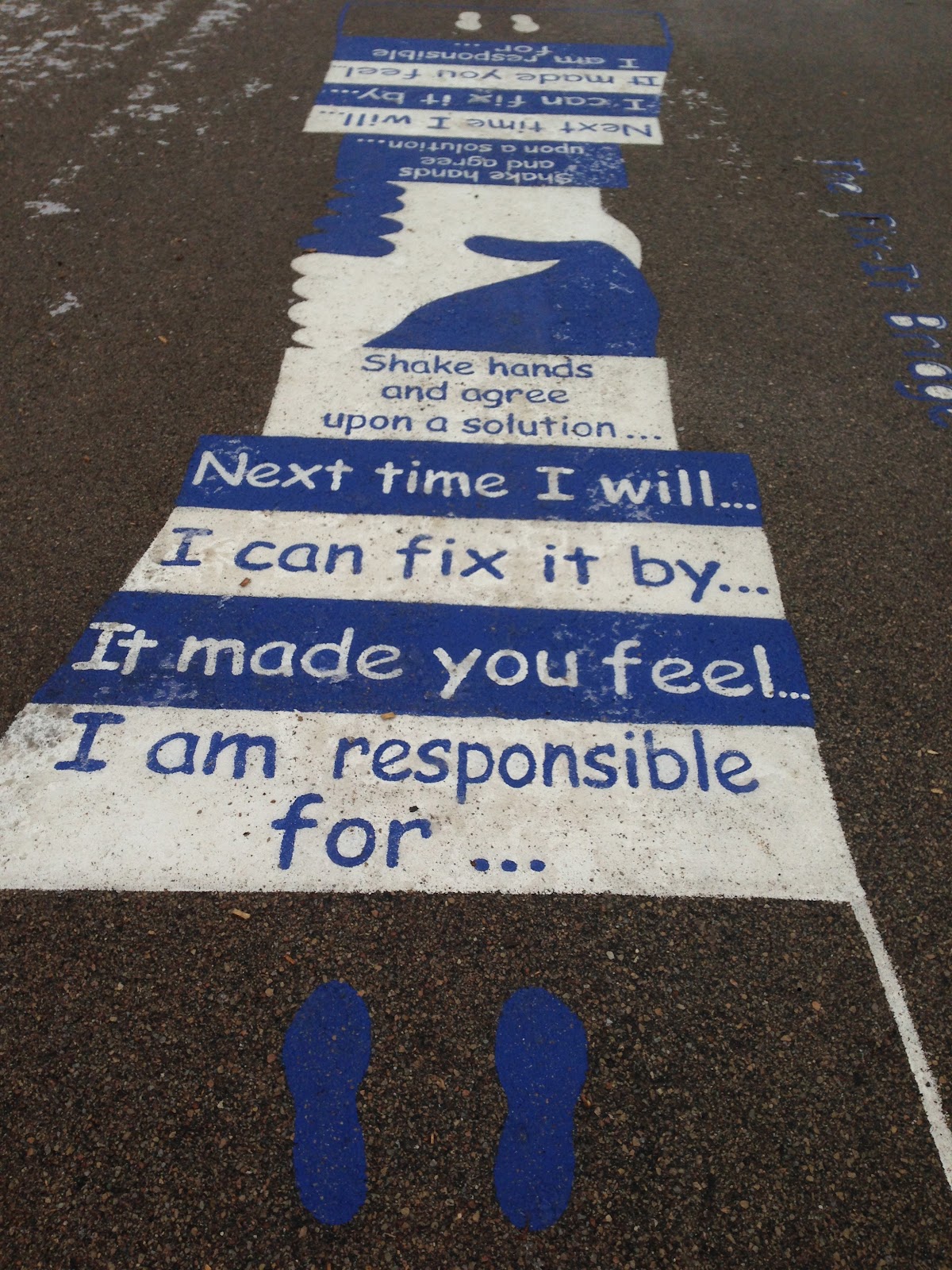 Having the language to work through conflict is important, and having a visual cue on the playground can be really helpful as well. Each playground looks different, and schools are encouraged to paint a peace path that would work well for them and their students. While some schools paint their Peace Path on the ground for students to walk on (such as the examples here), you can also post your path on a wall or fence for students to walk along as they talk through their problem.

If you have examples of Peace Paths from your own school or other useful conflict resolution techniques, feel free to tweet us and let us know!

Welcome back to the Joy Series ›

As we enter the last month of the year, we are thrilled to bring back the Joy Series. After a year full of transitions, growth, and exciting new changes for us, we’re looking forward to spending the next five weeks focused on joy. Here’s how you can follow along with the Joy Series:    …

Born and raised in Watertown, Massachusetts, Renee Gaudette has worked for youth development organizations in New England since graduating college and now joins us as New England’s new Executive Director. Her favorite recess game is 4-square (“I get really competitive… I can’t help it,” she admits), and she has a dog named California Sunshine Epps…

Building skills through play: developing youth leaders on the playground ›

What does youth empowerment look like at recess and why is it important? Every kid deserves the opportunity to shine. The playground is the perfect place to empower students and build their confidence by giving them opportunities to lead, whether it be with their own classmates or students in younger grades. Play is such a…