The conversation about how to revitalize education most often focuses on test scores; however, an overlooked opportunity to boost learning lies outside the classroom: on the playground at recess. Unfortunately, a chaotic and under-resourced recess environment in many schools interferes with our children’s healthy development and ability to learn.

The Center for Disease Control and Department of Health and Human Services recommend that school aged children can achieve substantial health benefits by getting up to 60 minutes of moderate-to-vigorous physical activity every day. Yet according to a 2016 study conducted on Boston elementary school students by Tufts University, only 15% of boys and 8% of girls achieved the CDC-recommended 60 minutes of daily physical activity. According to research on activity during the school day, recess is the best opportunity for physical activity, with 42% of daily activity occurring at recess, and yet the American Academy of Pediatrics reports that schools with high minority and poverty rates in urban settings are more likely to have reduced recess time as compared with their peers in affluent suburbs.

Every kid loves to play. Playworks leverages the power of play as an entry point to increase physical activity and provide productive recreational opportunities for kids. Before a school partners with Playworks, only 43% of students are engaged and playing. By creating a safe, engaging, and empowering playground, Playworks re-energizes recess and the participation rate increases to 90%.

Playworks approaches physical activity promotion from a variety of avenues, knowing that multiple component interventions are the most effective. With a full-time Playworks Coach, there are three main areas that programming influences:

In addition to targeting these areas, Playworks staff is trained to promote staff and adult engagement, as well as playing alongside students themselves, increasing a student’s likelihood of participation. When kids see adults playing and having fun, they want to join in and when making a mistake in a game is modeled in a positive light by a trusted adulted, kids are given the safe space to try new things without the fear of judgment and failure.

In all of these areas, Playworks aims to expand, extend, and enhance opportunities for physical activity during the school day. 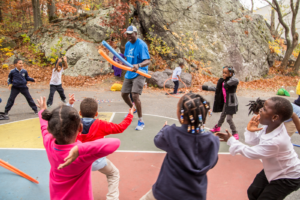 Expanding physical activity opportunities means incorporating movement into non-traditional parts of the school day. Playworks’ most common way of expanding physical activity opportunities is through the Class Game Time (CGT) program, in which Coaches and Site Coordinators meet with individual classes at a set time during the school day to teach and play new games. CGTs offer a trifecta of benefits. They give Coaches the chance to teach core social emotional skills through play, give students the space to interact with their teachers in a fun, interactive way outside of the classroom (remember that adult engagement we were talking about earlier?), and give students an extra opportunity during the day to be physically active.

Another time when students are normally stagnant but Playworks aims to incorporate physical activity is when kids are waiting in lines, either at the end of recess, waiting for their bus, or in line for lunch. By playing games like The Big Cheese, kids get an extra chance to move and is an easy way to tack on some extra jumping jacks.

Playworks New England also works with partners to expand physical activity opportunities. Boston Back in Motion, which took place in April 2021, was a collaboration of multiple partners including The Boston Foundation, BOKS Kids, BPS Moves Together, and The Red Sox Foundation. This month-long initiative encouraged schools to incorporate movement breaks into their classroom activity when students are traditionally sitting behind desks, and shared out resources to get kids moving. 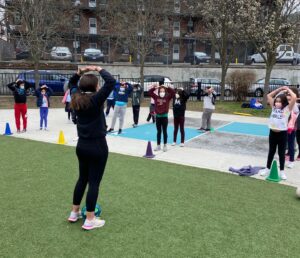 Extending physical activity is all about capitalizing on the time that you already have. Rather than struggling and taking 10 minutes out of a 20 minute recess to get kids lined up and listening at the beginning of recess, Playworks specializes in using attention getters to quickly and effectively get kids’ attention, explain the games for the day, and then let kids go play and run around.

Similarly, at the end of recess, Playworks staff utilize a variety of breathing exercises to calm kids down and help them transition back into the classroom or on to the next part of their day. Through effective shifts from playground to classroom, teachers at Playworks schools report taking significantly less time (34% fewer minutes) to transition from recess to learning activities than teachers in control schools. Due to those quick transitions, kids can play for longer at recess, extending their opportunities to be active. 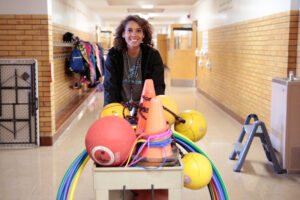 Regardless of how well you expand and extend opportunities for physical activity, the time always feels too short, which is why Playworks is a leading expert on how to enhance the play time that you do have.

At a Playworks recess, you’ll see that lines for games are kept short, which allows students to cycle through quickly and spend more time playing and less time in line. If there are lots of students who want to play Switch and the line is getting long, setting up another court is simple and will allow more students to play. On a similar note in group games, keeping team sizes small means that students can be more involved in their team’s strategy and play.

Playworks also has a “no elimination” policy. When students are eliminated from a game or are “out,” their time for meaningful physical activity and connection with their peers is cut off. In games that don’t require a set number of players, when a student makes a mistake and would normally be “out,” Playworks encourages them to simply do 10 jumping jacks, run a lap of the recess yard, or complete some other physical task and then hop right back in the game. In games where students have to be out, such as 4-Square, we make sure lines are short (as mentioned above) so that the time standing still is abbreviated.

Lastly, when recess equipment is scattered, lost, destroyed, or hoarded, it means that fewer kids can play actively. By managing and organizing recess equipment, students will have clear expectations of how to use the equipment and where to find it, meaning they can spend more time playing.

We know that the Playworks approach works, with demonstrated impact in areas of need. By focusing on expanding, extending, and enhancing physical activity opportunities, Playworks is a proven intervention to re-energize the school day and transform a child’s social, emotional, and physical health through play.