Recess Champions program recognizes educators who have made play a priority

Recess Rocks in Rhode Island, a six-year old partnership of Playworks New England, the Rhode Island Healthy Schools Coalition (RIHSC) and Blue Cross & Blue Shield of Rhode Island (BCBSRI), has launched an initiative to recognize school professionals who have made it a priority to incorporate safe and healthy play into the school environment during the coronavirus pandemic.

Recess Rocks in Rhode Island, which BCBSRI has strongly supported for the last six years, has been innovating rapidly to serve schools in a constantly shifting environment. Through this program, Playworks and RIHSC, through funding support from BCBSRI, are helping educators across the state pilot new approaches to incorporating safe and healthy play in their school day. Playworks has offered support to all Rhode Island schools this year, whether they have participated in previous cohorts or are new to the Recess Rocks program.

“The arrival of COVID-19 in early 2020 did more than disrupt our everyday lives. It also upended the school environment with children learning virtually, in a hybrid environment, in person or in a combination of the three,” said Jon Gay, Playworks New England’s Executive Director. “Despite these challenges, educators have taken steps to prioritize play and social-emotional learning, and have created recess systems that help students stay active and connected. It’s these Recess Champions who we want to recognize and celebrate.”

The first educators to be recognized as part of the Recess Champions initiative are Coleen Smith, the principal of the Wakefield School in the South Kingstown school district, and Craig Giarrusso, a physical education teacher at the Nathanael Greene Elementary School in Pawtucket. 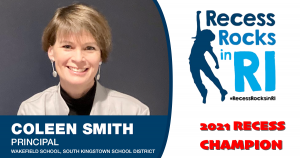 Smith noted that at her school students have benefited from recess this year more than any other year. “Students and staff have been feeling isolated because of the masks and physical distancing requirements. Recess has given them time to be social and active – it’s the outdoor release and movement break,” Smith said. “Recess has also been important as a time for staff to build rapport with the kids by talking to them, asking them questions and learning about each kid. Recess is the time to make connections and feel engaged with the students at personal level.”

Smith added that the kids have been showing how resourceful and creative they can be. “For example, in one recess, every kid was given a hula hoop and the kids got creative. The 9- and 10-year-old boys came up with nine ways to use a hula hoop in 25 minutes,” she said.

Giarrusso, who was part of the Recess Team from Greene that attended Recess Rocks in RI training in 2019, has collaborated with his colleagues to help address the need of students to have safe choices and opportunities to move at recess. “Without safe choices, students were getting rambunctious and the principal was receiving regular referrals from altercations at recess,” Giarrusso explained. “The Recess Rocks in RI program was a great fit – it provided students with positive game and activity options and also gave students the tools to negotiate and resolve conflicts.”

“We love hearing about the creative ways schools are innovating around recess and we applaud Coleen and Craig for their ongoing commitment to make recess a priority,” said Jon Gay, Playworks New England’s Executive Director. “We look forward to recognizing more Recess Champions in the months to come.”

During the pandemic, Playworks has partnered with 82 schools across 25 districts to redesign safe and healthy play opportunities for their students. This includes working with 64 educators through a new Virtual Learning and Play training series and providing weekly curated content to assist educators in bringing play and social-emotional support to every child’s day through Keep Playing subscriptions for 163 educators across the state. In particular, the Keep Playing game videos and brain break activities have helped reduce educators’ stress as they incorporate play in the virtual or socially distant learning environment.

The Recess Rocks movement continues to grow across the Ocean State as educators persist in prioritizing the health and well-being of their students. Learn more about how you and your school community can join the movement here.

About Recess Rocks in Rhode Island