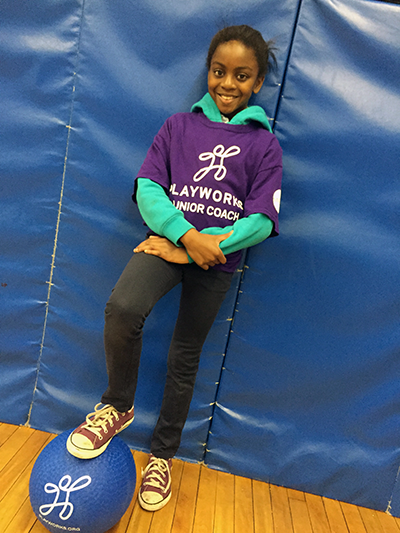 Junior Coach Patrice is a student at the Kenny Elementary School in Dorchester with Coach Nate. At the beginning of the school year, Patrice approached Coach Nate to express interested in being a Junior Coach. After receiving all of the applications for Junior Coaches, Coach Nate spoke with her 4th grade teacher, Mr. Lukens, about Patrices' behavior and his face immediately brightened up. Mr. Lukens explained that Patrice was an amazing student in the classroom and during her two hour after school program. Additionally, outside of school, Patrice participated in dance class. At this moment, Coach Nate knew she would be an incredible Junior Coach.

Over the course of the school year, Patrice has attended every Junior Coach training session, showed up on time, and has never shied away from participating in any activity or challenge even if she needed to try multiple times. She has taken on a leadership role on the playground, calmly deescalating tough situations during 2-on-2 soccer and Superstar Knockout. Patrice also has been working on breaking down barriers between the different groups of girls at recess, making sure that no one is left out of the conversation, game, or activity. After taking on all of her Junior Coach responsibilities and achieving her daily goal, she always asks Coach Nate for more tasks. Junior Coach Patrice has an amazing can-do attitude, the ability to include every kid to create a healthy community inside and outside of school, and dedication to the safety and joy of play for others.