October Coach of the Month!

Our October Coach of the Month is….Coach Jeff! Coach Jeff is a second-year AmeriCorps Program Coordinator at Village East Elementary School in Aurora, CO. Jeff comes to Colorado after spending a year being an AmeriCorps member for Playworks Southern California. Jeff has not skipped a beat since coming to Colorado and is already running a fantastic, safe, and inclusive program.

Coach Jeff quickly created many organized game options at a recess that regularly features seven classes per grade level. In addition, it can often be a challenge coming into a school that already has expectations based on prior Playworks touchpoints. Village East’s recess staff have attended Pro trainings, and their principal comes from a school that had a very strong Coach program. With that said, Jeff showed up professionally from day one, building rapport with recess staff and admin. right away, and getting his program up and running quickly. 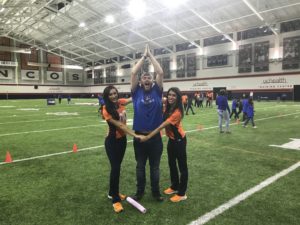 During the month of October Jeff has been quick to collaborate with office priorities. He has hosted many site visits at which he has gotten funders involved in games, collaborated on bringing volunteers to his Junior Coach program, and is always willing to jump in and support new coaches during trainings.

Coach Jeff has shown through his incredible energy and personality that he is committed to the Playworks Colorado movement and is going to continue to do amazing things. We are extremely happy that Coach Jeff decided to bring his skills to the mountains!

THANK YOU COACH JEFF FOR BRINGING SAFE AND HEALTHY PLAY TO VILLAGE EAST EVERY DAY!