Junior Coach K at Westgate Elementary used to be afraid of socializing. Becoming a Playworks Junior Coach changed that.

Playing at recess doesn’t come easy for every kid. Some kids struggle with shyness, anxiety, and fear of embarrassing themselves. Junior Coach K was a kid who struggled with play and struggled to come out of his shell. That was until Playworks was introduced at Westgate Elementary.

Playworks is a national nonprofit organization that serves kids through play by implementing a safe and healthy recess. With regional programming in Colorado, they serve thousands of kids in the Denver Metro area.

Before Playworks came to his school, Junior Coach K hardly enjoyed going out to recess. But with Playworks and Coach Jacob at his school, he started to feel comfortable being himself. “When I was in fourth grade, I was a kid who usually tried not to draw any attention to myself, but now I know it is okay to be myself around other people.”

The Junior Coach Program puts kids in a leadership role. During recess, the Junior Coaches help the adult Playworks AmeriCorps Coaches create an inclusive and fun environment for kids on the playground. Junior Coaches meet once a week to learn new games and learn leadership skills that they can use in other aspects of their lives.

Playworks’ Junior Coach Program has helped Coach K realize his potential and helped him get over his anxiety of participating in activities with other kids. He has now come out of his shell and started enjoying recess and play. 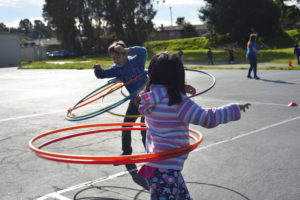 He is not only a Junior Coach; he also takes part in multiple extracurricular activities, including floor hockey and choir. According to Coach K, all of the things that he has done this year were because of Playworks. “If it wasn’t for the Junior Coach Program, I wouldn’t have done all of the activities that I’ve done this year. ”

In the 21st century, there is no doubt that schools around the United States have put less of an emphasis on play and recess. This lack of attention to play leaves some kids feeling left out and bullied. Playworks is looking to change that trend. We are driven to give every kid safe and healthy play throughout U.S. schools because we know that play helps with a child’s social, physical, and mental development. At Playworks, we believe that play is a pivotal part of turning our kids into future leaders and well-rounded, successful adults.

More In the News

U.S. Deputy Secretary of Education Cindy Marten visited Clyde Miller P-8 on Wednesday to see how emergency relief funds are being used in local districts.  With an eye on mental health efforts, Aurora Public Schools is partnering with Playworks and other fantastic organizations to support our students in Colorado. U.S. Deputy Secretary of Education Cindy…

U.S. Deputy Secretary of Education Cindy Marten and Playworks CEO Elizabeth Cushing joined Playworks Colorado on Wednesday to see our partnership with Aurora Public Schools in action. While the weather forced us inside, the rain didn’t stop Coach Jack from facilitating an engaging recess with games like RoShamBo (Rock Paper Scissors) Rockstar and RoShamBo Evolution.

Colorado students, schools reflect on year of Playworks amid pandemic ›

All year, schools have been trying to rise to the challenge of transitioning students back into interacting with their peers. Many of these schools turned to Playworks Colorado to help students ease pandemic trauma through play.