For the last four years, a floor hockey league funded by the NHL in partnership with Kroenke Sports Charities has been a popular after-school opportunity for 4th and 5th graders in Playworks partner schools. Starting in mid-October, this eight week co-ed floor hockey league brings together 12 students to participate on a team, have fun, and play during after-school hours. 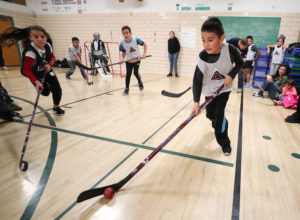 After-school on Tuesdays in the school gymnasiums are dedicated to the floor hockey league. Practices and games alternate each week and students play against teams from other Playworks schools. In the 2018-19 school year, 18 Coach and two TeamUp partner schools are participating in the floor hockey league, impacting about 240 students.

Participants in the league learn the value of teamwork, responsible decision making, sportsmanship, and have the opportunity to play in a safe environment after-school. In addition to the social and emotional impact, students are engaged in a new sport and develop hockey skills. Participants also benefit from new Avalanche branded equipment and jerseys. At the end of the season, participants take home their stick, a floor hockey jersey, and practice pinnie, and get to attend an Avalanche game.

John-Michael Liles and Rick Berry joined floor hockey participants at Molholm Elementary with Newlon Elementary to jump in the game and play along students. It was the first floor hockey game of the season and similar to past years had a great audience turn out. Check out some of the fun!
Photos taken by: Michael Martin 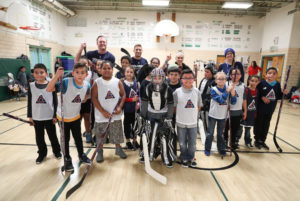 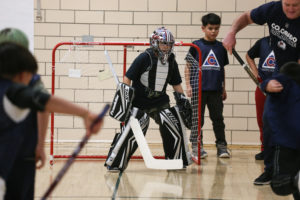 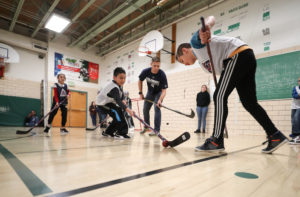 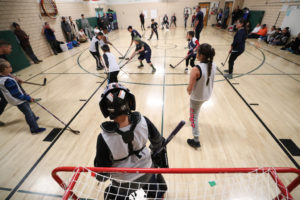 “Floor hockey is fun. I like it because I get to have fun and play new games. Floor hockey is a great league for people who want to learn new things and have fun with new friends.” – floor hockey participant

“My kids were nervous to play a sport they weren’t too familiar with and they quickly realize they can do the sport by being confident in themselves and getting our of their comfort zone to have fun on a team. This was the biggest impact the hockey league has made on my students, the transformation in my kids and building their confidence.” – Playworks coach

“I love this!” – principal at Playworks coach school