A Day to Play and Break Barriers for Girls in Sports

“Today I got to hang in a world where Rock Paper Scissors solves all and Fortnite dances are the new hello,” stated Meagan Kong, professional dancer/athlete and Adidas ambassador, in an Instagram post about her experience at a Playworks event.  #adidaswomenla

From indoor recess to cooperative after-school games, it was a day to start breaking down barriers and empower the next generation of women athletes and leaders. On January 16, Playworks partnered with Adidas and its “ambassadors”—a group of female athletes, innovators, community leaders, and entertainers from around the world—to kick off the She Breaks Barriers initiative in Southern California.

Jefferson Elementary School in Lennox hosted the day of fun and inspiration, with its own Junior Coaches joining together with students from two other Playworks schools. The wet weather outside hardly mattered as Playworks AmeriCorps Coaches and Junior Coaches showed that active and healthy play can happen anywhere. They led a series of classroom games, teaching pros from the WNBA and other sports some new tricks.

The day also featured a lunch-and-learn panel, after-school team building, and plenty of opportunities for the Adidas ambassadors to share their personal stories and for kids to ask these inspirational women questions. The She Breaks Barriers initiative works to support young girls and help them grow into strong, confident, and healthy leaders. The barriers to girls in sports can be very real. According to the Women’s Sport Foundation, by age 14, girls drop out of sports one-and-a-half times faster than boys. By age 17, more than half of girls who participated in sports have quit because they don’t have a sense of belonging.

Janelle Matthews, a Playworks program manager at the event, says her own experience bears this out.

“Even when I was a young girl, I liked to play football and basketball, and I always got a hard time, like, ‘Why don’t you go play jump rope? Why do you have to come over here?’ So I think that struggle of gender domination of certain sports can definitely drive young girls to shy away from playing them. It’s so important for me as a female coach to say, ‘Hey, I’m a girl, and I’m going to play, too. You want to play soccer? Let’s go play soccer.’”

That’s why the day’s message was important for the handful of boys who came to the event, too. One boy was awestruck when he met Christie Rampone, the former captain of the U.S. Women’s National Soccer Team, three-time Olympic gold medalist, and two-time World Cup champion.

“His mouth was open, his eyes were bright, he was looking at his friend next to him and nudging him like he just couldn’t believe it. That’s learning, too. You think about him as a young boy, looking at this woman who had dominated in the sport of soccer and looking at her with respect and excitement. Think about him going back to his school and having a different perspective on girls playing soccer,” Janelle says. 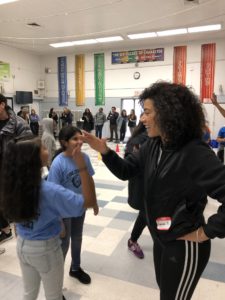 On Tuesday, November 15, 2022 agron, inc. employees joined students at Jefferson Elementary in Lennox Unified School District for a Playworks Play Day. Employees and students were ear to ear in smiles as they experienced the power of play together on a sunny, Southern California morning.  Thanks to our continued partnership, many agron, inc. employees…

Playworks Southern California is pleased to present this impact report highlighting our programs and services during the 2021-22 school year! We are excited to share with you a look back at our accomplishments during the 2021-2022 school year. During the year, we focused on rebuilding after the impacts of the COVID-19 pandemic during two school…

As our communities emerge from a year of isolation, Park on the Move supports kids re-engaging through sport and play. Playworks celebrates year one of three in partnering with Park on the Move, a mobile program to bring a unique play experience to youth in neighborhoods who have limited access to park and recreation space.…