Michelle Serrano Runs for Play in the Los Angeles Marathon 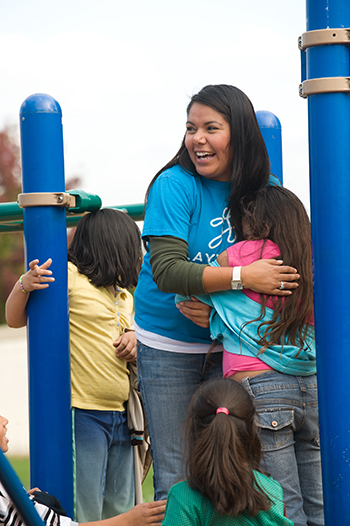 Playworks would like to highlight one of our 2018 LA Marathon Charity Challenge superstars: Michelle Serrano. Now in her twelfth year with Playworks, Michelle currently serves as the associate director for Playworks Southern California. We caught up with Michelle to learn more about why she chose to #run4pLAy two years in a row. This was her second year running about half of the full marathon course.

Michelle started at Playworks then Sports4Kids), in 2006 while working with the AmeriCorps and attending Santa Clara University. Her passion for the mission of Playworks, coupled with her love of sports, led Michelle to help establish the Playworks Silicon Valley office. The project proved to be a strong combination of community service, working with kids, and of course, playing!

“I love the idea of giving back,” she says. “The experience completely changed my perspective on life and the trajectory of my career. The kids I worked with in San Jose assumed I would leave after my time and not come back. This idea that I was just going to be another person that came in, built relationships with the kids, made a difference, and then is gone to the next project rattled me.”

This attitude motivated Michelle to work for three years at Mildred Goss Elementary School in San Jose. Her time at Mildred Goss stands out as one of the most impactful experiences of her career. The school was comprised of mostly first-generation students many with growing anxieties about the immigration statuses of loved ones. Many students found an outlet in sports, particularly soccer.

For as long as Michelle can remember, soccer has always has been one of her favorite sports. This common love for the sport was pivotal in building meaningful relationships with the kids in Mildred Goss. Being a female coach, she quickly noticed that she would be the only girl on the field during soccer games with the kids. Michelle played hard, and the other girls on the sidelines loved watching her.

“I remember the girls would tell me ‘Coach, you’re weird,’” she recalls. “I encouraged them to come out and play with the boys. They usually were not invited and didn’t have the confidence to play with boys. I wanted to stress that regardless of gender if you are interested and excited in something, go and try it out!”

Michelle was delighted to see the girls of Mildred Goss gradually begin to be more involved in the games. Eventually, so many girls were participating that they were able to begin competing in their own tournaments. At the end of her first year, Michelle had established a co-ed soccer team so both genders could play against other Playworks partner schools.

“Inclusion is such a core value at Playworks. The parents had no idea of their girls’ interest and talents in soccer. I loved being able to have this opportunity to expose the local community to new ways of thinking,” says Michelle.

Michelle believes the feeling of inclusion she experienced at Mildred Goss is also a key aspect of the marathon. She knew that after settling into her role in Los Angeles, the “Run for Play” marathon was something she had to participate in. Although she did not train extensively or particularly enjoy running, she fell in love with the goal of the marathon in advancing Playworks’ mission. Michelle is proud that she was able to finish the half marathon with her husband and family.

“The first time I did the relay marathon approximately 13 miles, I was three months pregnant!” says Michelle. Although running was never her favorite activity, completing the half marathon allowed Michelle to step out of her comfort zone. She admits that the support she felt from her loved ones and the kids at the marathon pushed her to finish.

“Meeting the kids makes the race feel real,” she says. “There was so much enthusiasm and positive energy. I can’t believe I’m saying this, but it was actually so much fun!”

“Anyone of any skill level can participate and have a truly positive experience. I’m going to do this every year,” says Michelle.