Over the course of the year, Kayla has made a complete transformation.  All she needed was a boost of confidence and the opportunity to shine.

The first time meeting Kayla, I noticed she was quiet and unsure of herself.  I took the time to check in with her and began observing her at recess. I observed that she stuck with her “best friends” not really engaging with the general student body. Weeks later, I asked her if she would be interested in playing on my kickball team.

With the largest SMILE she said, “Yes, Coach, I would love to!” But then immediately sunk down and said “I do not know how and I am not going to be good at it.” 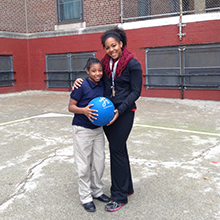 “Lets not worry about if you are good or bad, and lets focus on learning how to play!” I said.

She was very excited that I was willing to teach her.  Initially I asked her to join me at recess, my students play everyday. However, the competitive nature and the larger students that play intimidated her. It was not until after we had our league practices that she felt a little more comfortable to play. She only played at recess for a few days before returning to her group of friends. Though she did not stick with kickball that week, I give her kudos for stepping outside of her comfort zone.

The BIG day finally came, our kickball jamboree. Kayla was literally sick to her stomach and did not feel she was ready to play.

I purposely assigned her with the first kick of the day, telling her “our team is counting on you to start the day off.”

Nervous and all, Kayla kicked that ball and made it to 1st base safely.  With her mom andgGrandmother were on the sideline cheering for her, Kayla was brimming with excitement!

As the games continued, Kayla showed a side of herself that I have never seen. She was competitive, confident and was having a BLAST.  She now holds her head higher with a smile on her face, ready to PLAY.  All she needed was a boost of confidence and opportunity to shine.