The New Look of Recess

Last school year, Ardmore Elementary School received a Playworks Recess Implementation training to make their playground and recess more inclusive and respectful — a place where every kid would belong. The Bellvue School District reports how a Playworks training helped to bring recess where “everyone plays and everyone contributes to the game.” Get more information about Playworks trainings here. 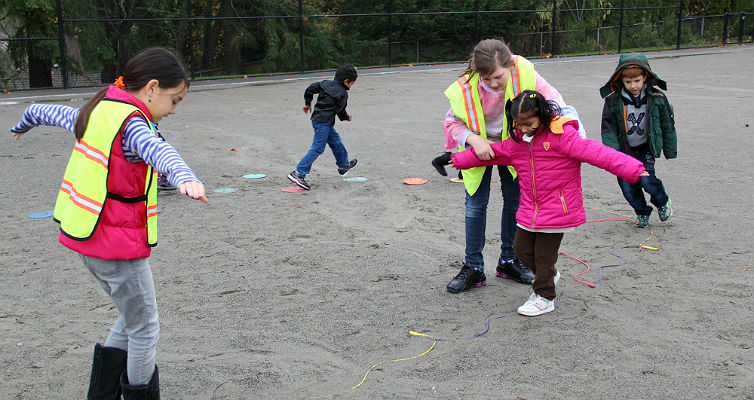 Ardmore Elementary fourth and fifth graders in bright yellow and orange safety vests race to tag younger students in a high-energy game of "Sharks and Minnows."  The older students are Game Leaders, who escort the kindergarten and first graders to recess and engage them in fun games, like "Lava," "Four Square" and soccer.  Anyone can join in any game and no one is told, no, you can't play.  Everyone is having a lot of fun.

Last school year, Ardmore, Lake Hills, Sherwood Forest and Stevenson elementary schools implemented the Playworks program and transformed recess.  Playworks is a structured activity program for recess used in schools nationwide.  Different activity and game zones are set up throughout the playground.   Most importantly, there's a place for every student on the playground.

This new approach is having a dramatic impact.  In one year, the number of students sent to the Lake Hills Dean's office for fighting, pushing, or other aggressive behavior on the playground during lunchtime recess has been cut in half.  Ardmore also cut its referrals from the playground by half.  Nationally, schools using the Playworks program report a 79% decrease in bullying at recess and 68% fewer conflicts once students get back to class.

With Playworks, everyone plays and everyone contributes to the game.  The schools try to regularly introduce new recess games, in addition to the old favorites like Four Square and Wall Ball.  Staff members and playground monitors, who received training from Playworks before the launch, also received a playbook with dozens of possible activities.   With the different playground zones, there's something for everyone.  Students are welcome and able to play in any game.

"Everybody participates. Nobody says 'no you can't play,'" explains George Duarte, Dean of Students at Lake Hills Elementary School.  "A lot of kids have low self-esteem about their talents and this just wipes that away.  They can play and not worry about whether somebody's going to judge them."

Students can still play traditional recess games like basketball, but they may look different.  Instead of team versus team, where some students may not get a chance to handle the ball, Lake Hills uses drill-like activities that include everyone.  For example, everyone gets a chance to dribble a ball up the court, shoot a basket, then dribble back down the court and pass the ball to the next person in line.

You'll see a lot of high-fives on the playground.  "It's about being positive in anything that we do," explains Duarte.  "When someone is out of an activity and get on the recycle line, we encourage kids to say 'Hey, it's OK' and high-five them on the way out.  It just keeps a positive vibe going."    In Playworks, no one is out or loses.  They head to the recycle line to wait their next turn.

You might also spot students playing a lot of RoShamBo, or "Rock, Paper, Scissors."  It's how they've learned to manage conflict.  "If you think the ball was out or in, and there's a conflict, instead of arguing about it and raising your voice and being the louder one, because 'If I'm louder, I get my way,' they just stop and go 'RoShamBo!'  Whoever loses RoShamBo goes to the recycle line," explains Duarte.  "They know how to resolve conflict, as opposed to just walking away and someone feeling upset that somebody else got their way, that they're cheating or they're not playing fair."

Playworks also promotes student leadership development.  At Ardmore, fourth and fifth grade students are invited to become Game Leaders, or leaders of games with younger students.  "Our big goal this year was to shore up the game leader component, because that's so powerful," explains Betsy Norton, Ardmore's Positive Behavior Intervention Specialist.  In the first year of the program, about 15 Ardmore students applied for the Game Leader positions.  This year, more than 50 fourth and fifth graders signed up.  Out of those, 18 were selected and trained on how to play the games and how to teach them to younger students.

Ardmore tweaked its schedule this year, which allows Game Leaders to leave their last class before lunch ten minutes early, if their work is done, and eat lunch with the kindergarten and first graders.  Half the team leads recess on Monday and Tuesday; the other half is in charge on Thursday and Friday.  Once on the playground, they show younger students how to play the games of the week and cheer them on as they avoid "hot lava" or toothy sharks.

Two older boys have also taken kindergarten soccer fans under their wings, showing them the ins and outs of the game and cheering every time one scores a goal. "I simply said to them one day, 'would you be interested in helping the little boys who want to play soccer.' They said 'sure' and just took that on," Norton says.  "I'm always amazed that if you raise the bar, and you give students that challenge, they always step up to the plate."

Ardmore student and Game Leader Maria perhaps sums it up best with what she likes about Playworks:  "I like how we can help.  You make more friends that way."