During the month of March, Kaiser Permanente and Playworks were excited to see Shaun Livingston, shooting guard for the Oakland Golden State Warriors, and Ruthie Bolton, two-time Olympic gold medalist and WNBA legend, stopped by to participate in the collaborative initiative Get Fit. The initiative, a partnership between Kaiser Permanente, Playworks, and the Golden State Warriors, is aimed at Bay Area youth and stresses the importance of staying active and practicing healthy eating habits.

This Get Fit Friday event took place in San Francisco at Longfellow Elementary and featured 130 Playworks students. No strangers to physical activity, both Livingston and Bolton had no problem keeping up with their younger supporters. As part of the Golden State Warriors’ “Hear Us Roar” campaign to celebrate Women’s History Month, a panel of women leaders from Playworks, Kaiser Permanente, and the Golden State Warriors led the day’s activities.

Playworks is honored to participate in Get Fit, which not only encourages healthy play and physical activity but also supports and recognizes the importance of community. 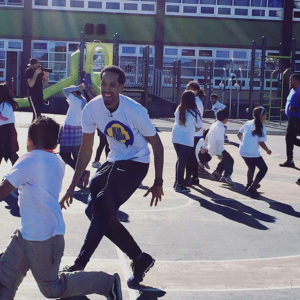 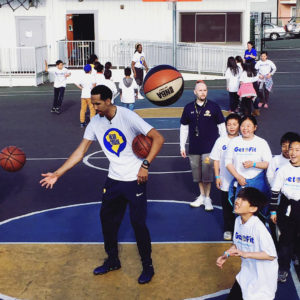 See more photos from the event at NBA.com