Story from the Playground: Coach Ryan 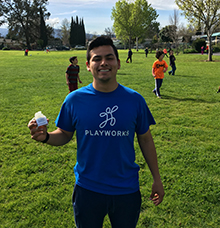 Playworks has the power to bring out the best in every kid! Playworks coaches work hard to establish positive school environments and positively impact students' development through fun, safe play. The following story highlights Coach Ryan's most memorable and rewarding experience with Playworks.

Being a Playworks coach is one of the most fun and exciting jobs a person could have. The only issue a coach might experience is only being able to be in one place at a time. Kids want and need your attention every day. You do all you can, whenever you can, to be as available as possible. Having said that, this month I’ve had many kids ask me to attend their school play. I told the kids that I would do my best to attend one of the three showings, but it is an after-school event, which can be hard to attend. Every day dating back until February, they would pester me until I gave them a definite answer. The week of the show, they asked me one last time and I told them that, unfortunately, I could not attend, but wished them luck. Little did they know that I would surprise all of them and cheer them on. The day of the play, I showed up a little early to see their faces glow like it was Christmas morning. I felt like I gave them a little confidence boost, because they had said they felt so nervous before the play. After the show, I had numerous students introduce their parents to me to tell me they were so happy that I tricked and surprised them by attending the show. It was so great because I was able to make so many students’ days, while also being able to meet many new parents.