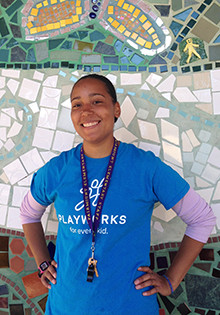 Playworks Northern California would like to honor Jennifer Holmes-Ledet of Fairmount Elementary for her outstanding service this month! She truly has embraced the AmeriCorps culture through her commitment to service in her school community. Here she highlights one of her proudest moments as an AmeriCorps program coordinator.
As a Playworks coach, I lead and coach hundreds of kids in different games every day. Often, when they are nervous and not sure if they want to participate, I offer to play with them and give them the confidence to join the game. And sometimes it works the other way around. When I found out I would coach the girls’ basketball team, I was the one who was very nervous and not feeling confident. I thought it would be impossible. Although I am an active person, and have worked with kids for years, I didn’t know much about organized sports – especially basketball. My only memories of playing basketball were when my twin sister’s team was short a player and they assumed that because I was tall I would play well. They were wrong.
Learning the basic rules of basketball took time, but I explained to my team that this would be a learning process for all of us. If we worked together the team would be successful. However, because many of my players were also unexperienced, the season started off rocky with a lack of communication and sharing the ball. So we started at the beginning. And after we had the fundamentals down we focused most of the season on being a team and working together.
And it paid off. At the end of the season we had a really close game. Coaching from the sidelines, I see a player is wide open for a shot. I shout, “pass the ball, she’s open under the basket!” The ball ends up in the open player’s hands and she hasn’t made a shot all season. Although she is the shortest girl on the court, we all had worked on building our confidence together. So she launches the ball up with all her might and goes for the shot. She makes it! My team was so overjoyed that they all forgot about the game and started cheering and giving high fives.
That was a very proud moment for me and the whole team. By the end of the season, I realized that I was able to help the girls as a basketball coach, but they were also able to help me. As with the girls basketball team, my service to my school community through AmeriCorps has helped me become a better person.