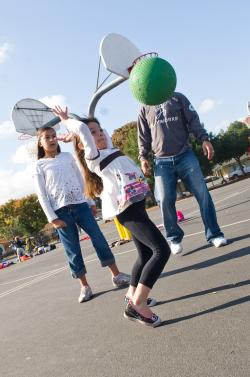 When I began at Carver Elementary there was a lot of chaos on the playground. This chaos ostracized many kids from playing games. It seemed as though the students did not want to play four square or other games because of the negative vibes that surrounded these games.

As the weeks progressed, the climate began to calm down. There was a shift in mentality at the majority of our playground games. One child in particular really shined from this change.

Jasmine started the year very shy and timid about playing. I continued to talk to her and try to get her more comfortable playing four square, since I was spending the most time ensuring it was becoming more Playworks friendly. Jasmine slowly began playing four square each day, and her enthusiasm for coming out to recess increased.

So did her relationships with her classmates. At the beginning of the year, I did not see Jasmine talk to many kids, but, as her level of confidence in four square grew so did her peer relationships.

After a few weeks I began to recruit Junior Coaches in my student leadership program. I really hoped Jasmine would apply, but I was not sure since she still seemed a bit uncomfortable. I was pleasantly surprised when she brought me her application.

I gladly made Jasmine a Junior Coach and she has thrived in this position; becoming more and more confident in expressing her voice and really developing confidence in herself.  She also began to roam to other games — not just four square. This is a huge win because I see her finally venturing out of her comfort zone by herself.  Not only has she become one of my stronger Junior Coaches, she also has come out for the girls basketball team and is slowly becoming one of the leaders of the team.

Seeing someone like Jasmine change and become more confident in herself has really shown me what a positive influence I and Playworks can have on the student population and the community.