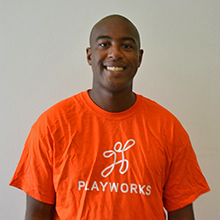 Playworks is excited to announce that it is finally AmeriCorps Week! Like any other Playworks celebration, we must begin with a high-five.

Here in New York and New Jersey, Coach B is the perfect example of an AmeriCorps member making a positive impact with his energy and positivity. Coach B is currently serving in his third year as an AmeriCorps member and has maintained a high level of enthusiasm and optimism since day one. As our current flex member, Coach B travels to a different school every day and greets every single person with a high-five. More importantly, Coach B begins each day by ensuring that students are starting their school days with a smile. At any point of the day, Coach B can be seen actively participating in games with kids, supporting coaches with programs, working on community engagement initiatives, or just simply laughing with anybody and everybody.

An example of Coach B’s impact can be found in one of our partner schools in New York. In a recent meeting, school staff said that their school climate had completely changed in the few days that Coach B has been there. They stated that the most visible change could be seen in the way that students were interacting with each other. In a few days, students were walking around high-fiving other students and educators.

There has been a recognizable decrease in bullying at Coach B’s school. In that same day, one fifth-grade student expressed that she “feels safe on the recess yard.” Before Coach B arrived, children played but she felt that it was every child for him or herself and that adults just needed to make it to the end of recess. If the adults did intervene, it would be at the cost of everyone’s recess time. She didn’t think that adults cared about having fun and being safe at the same time. It always felt like it had to be one or the other.

When Coach B arrived, the school environment quickly changed. During his first day, Coach B witnessed an argument at recess and instantly interjected. He quickly talked to the two students and helped them resolve their conflict. The fifth-grade student witnessed her classmates high-five for the first time.

Because of Coach B, this fifth grader feels that there is always an adult supporting her and now she can play to her full potential. More importantly, other educators now make her feel this way. This student offered the program director a high-five and ran back to class. This is one of the many examples of how Coach B and his high-fives make a difference.

Coach B credits his AmeriCorps team for his love of the high-five. He stated that on his toughest days, he has always been able to reach out to fellow AmeriCorps members or his manager and begin every conversation with a high-five. It instantly reminds him that he is part of a team and that the overall goal and purpose is to support the community.

Playworks New York and New Jersey would like to extend the biggest high-five to Coach B and the rest of the AmeriCorps members across the country.

When the Buffalo Sabres Foundation was looking for ways to virtually engage their young fans after their Kids Club programming was canceled due to COVID, they turned to Playworks. Building off of the Sabres’ interest in introducing ice hockey to more girls, Playworks created the Girls Community Leadership Program. Dontae Privette, Playworks Community Engagement and…