Meet Corey, Playworks coach and dedicated mentor changing the world one recess at a time. Corey has been making a strong impression in PS 11 on and off the playground by enabling kids to reach their potential in true Playworks fashion. 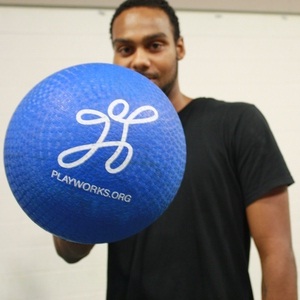 What interested you in the Program Coordinator position? Before I was at Playworks, I worked with children in foster care – which helped me grow up really quickly. I worked with teenage boys in uncertain situations and had to work with them to ensure they would realize a solid future.

After moving from Michigan to the East Coast, Playworks was a natural fit because I grew up playing sports, and it had a big impact on my upbringing. I want to give the students I work with the same opportunity in sports and physical activity.

What change have you seen at PS 11? Initially they were wary of me but I was able to earn the kids’ respect.  The impact of Playworks is clear – there is a high level of interest in being a Junior Coach. Students who aren’t Junior Coaches are involved and want to help, and the games have had an impact on how kids behave on the playground and in the classroom. Kids are literally begging me to be Junior Coaches and I have a waiting list of people! The core values we try to instill are evident on the recess yard.

What is your favorite recess game?  Two actually. For the older kids, we started a kickball tournament. It is competitive, the kids have fun and they remain active. I coach one team and another staff member coaches the other.