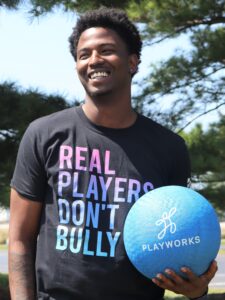 “Being a coach has given me hope. Everybody is living different lives. You can never know what people are going through unless you really sit down and talk to them. Before this job, I felt as if I had nothing to show for. I felt as if I had little to no skills in the real world but this job has shown me that I do.”

Coach Bub, as he’s more commonly referred to as, is a first year AmeriCorps Coach serving at Brookside School 54. We are so excited to introduce him as our next Coach in our spotlight series. He has learned a lot about himself and his students while serving with Playworks at Brookside. When he first started the school year at Brookside, he spent a lot of time breaking up  fights and student conflicts at recess. 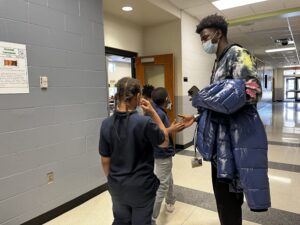 It had become a battle to help students get along with one another at recess and self regulate; an issue Playworks is seeing across all of our schools as a result of the disruption the pandemic brought to traditional learning models. Now, Coach Bub has students at Brookside using conflict resolution skills like  RoShamBo (rock paper scissors) to solve conflicts at recess so they can get back to playing faster and spare any hurt feelings.

He says this strategy from Playworks has helped not only out on the playground, but in the classroom too.

Coming into the 2021-2022 school year, Coach Bub was really nervous about being a Coach. He was worried about breaking out of his shell and stepping into a leadership role for students and within the school community. Brookside is so lucky he did though! He has made a huge difference for kids at recess and the classroom. 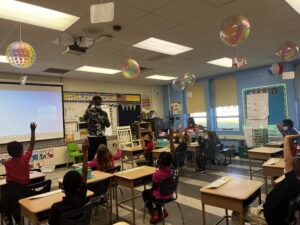 “I have a big group of kids who really enjoy my presence and to see some of the impact I’ve made in the school is crazy. Makes me feel special.”

You are so special Coach Bub! We appreciate the positive energy you bring to school everyday. Keep up with Coach Bub and all our other AmeriCorps coaches on our Instagram @PlayworksInd.

Playworks Indiana is excited to share our Mid Year Impact Report with you! In this Impact Report you can find our impact numbers so far this year, an update our All IN Sports League, an insight to our Tag Team pilot with the Boys and Girls Club, and our recent case study on our Junior…