On September 29, 2021, Playworks Indiana hosted its annual Corporate Kickball Tournament and it was awesome! This was Indiana’s first in person event since the start of the COVID-19 pandemic and it was so exciting to be in person again for our region’s signature employee engagement event!.

All together, we had six different companies participate with eight teams of 8-15 players for a double 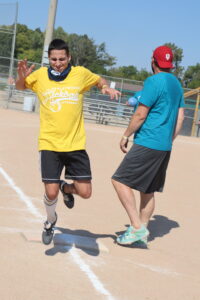 elimination tournament this year. This included Salesforce, FinishLine, Zylo, OneAmerica, Citizens Energy Group, and Indiana Sports Corp. It was great to see our teams after a year of not being able to play in person and they really showed up this year. If you weren’t able to make it, here’s what you missed!

The day started off strong, showing some real powerhouse teams early on. After the first round of games, one ofthe 3 Salesforce teams quickly started dominating on the the field as all three teams progressing into the ‘Recess Rockstars’ bracket along with FinishLine. This left OneAmerica, Indiana Sports Corp, Zylo, and Citizens Energy in the ‘Good Job, Nice Try’ bracket. After the second round of games, it was clear Salesforce was a force to be reckoned with. Salesforce teams One and Two remained undefeated and went head to head in the ‘Recess Rockstars’ bracket. In the ‘Good Job, Nice Try’ bracket, Salesforce Comp Ops and Indiana Sports Corp progressed to round three and played their hardest to see who was going to make it back to the ‘Recess Rockstars’ bracket and have a chance at the championship. 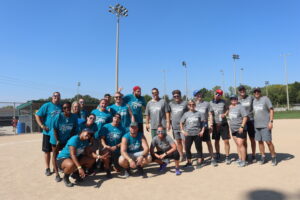 Emotions were high as we watched another Salesforce vs. Salesforce match. Both teams played spectacularly considering they had played a total of nine games combined. After an amazing show of athleticism, Salesforce Two came out victorious. They were undefeated the whole tournament and definitely came prepared. Congratulations Salesforce team Two!

Playworks Indiana is so thankful for each and every player who came out for a day of team building with their colleagues all in support of the Playworks mission. Together, we were able to raise $12,000 to support safe, healthy, and inclusive play for every kid in Marion County elementary schools Playworks is partnering with this school year. This event would not have been possible without our sponsors; City Barbeque,who kept our players fed and energized,  our beer sponsor, Sun King, for keeping our players hydrated, and Pike Township Fire Department sponsoring on site health and safety It was such an incredible event and we can’t wait to see everyone back at the fields next year!

If you are interested in getting involved with our 2022 kickball event, please email emily.kitterman@playworks.org to learn about getting a team together or being apart of our kickball MVP planning committee.

Playworks Indiana had a busy October, emphasizing safe tagging and inclusive play at our partner schools and starting our second All IN Sports league of the year, Flag Football! Organized sports, especially football, can be a really intimidating sport for both students and parents to get excited about due to the physicality factor. At Playworks,…

Playworks Indiana’s 2022 Corporate Kickball Tournament was a spectacular day! We are so excited to share a recap of the day, filled with amazing plays, awesome kicks, and a lot of comradery and fun! Check out photos from the day here and watch our recap video, courtesy of Frontrunner Media! Now let’s get into the…